Ashley Young: I'll learn so much from Giggs and Scholes 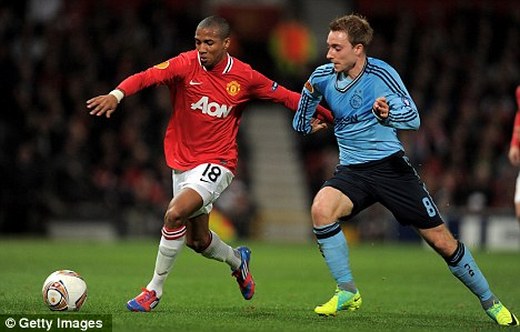 Ashley Young has revealed the secrets of sharing a dressing room with veteran pair Ryan Giggs and Paul Scholes.

‘Whenever players like that speak, you sit there and you listen,’ said the England winger.

‘They are two players who have had magnificent careers. You look up to players like that. I would love to emulate any one of their careers.’

United’s last-gasp win at Carrow Road has set them up for this afternoon’s visit to Tottenham Hotspur, a match which Sir Alex Ferguson regards as vital in their bid to hang on to the Premier League title.

But Young believes they will need to dig deep into the memory of the team’s shameful 6-1 Old Trafford humbling by neighbours Manchester City earlier this season to guard against a similar reaction from Spurs, who suffered a 5-2 defeat at arch-rivals Arsenal last Sunday.

‘I think you expect a reaction from any team who have been beaten like that,’ said Young.

‘They are in front of their own fans and will want to turn round the defeat they had last week.

'We know that they are going to be up for the game. But we will be as well — we want those vital three points.

‘Everybody has setbacks throughout the season but it’s the way you respond. We responded magnificently. We looked forward and never looked back.

‘Spurs have done magnificently. They have been pushing us top two Manchester teams all the way.

'We know it’s going to be a tough game but if we go into the game showing the confidence we have been showing over the last few weeks, then I’m sure we can get the right result.’

Young, aware of the importance the United manager has put on the game, shares his conviction that beating Spurs could test City’s resilience at the top of the table.

‘Everybody has the same belief — from the manager to the players, to all the staff, everybody is believing and driving forward. We all have the same focus to go and win those remaining games.

'We know it’s going to be a tough game but, as the manager says, it’s vitally important to get those three points. If we can, then we will be pushing City all the way.’