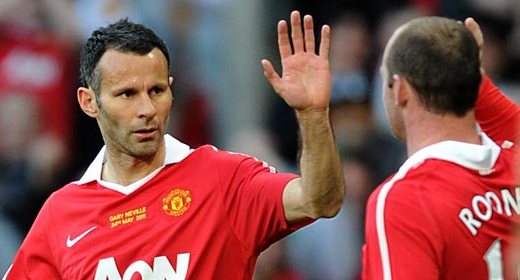 Ryan Giggs has long been tipped to be a future Manchester United manager. Now, according to some reports, he’s been given Sir Alex Ferguson’s blessing to be the next one – ahead of Jose Mourinho and Pep Guardiola. But is a legendary playing career experience enough for him to become the new Fergie? CHRIS WATHAN looks at whether Giggs the gaffer is a realistic prospect

NO-ONE has ever doubted him as a player. After all, he is someone who has won pretty much everything there is to win.

And you don’t get to 899 games for Manchester United without having something about you, to say the very least.

But as a manager, Ryan Giggs has still everything to prove.

Still, that has not stopped Sir Alex Ferguson making him the heir apparent to his Old Trafford throne, the Scot having reportedly told confidants that Giggs is the chosen one to replace him upon retirement.

Inexperience, it was said, can be overlooked for all the other manager-in-the-making qualities he possesses.

Indeed, it was enough for the Football Association of Wales to twice try and tempt the 64-cap star into his nation’s hotseat only for the pull of playing on at Old Trafford to keep him away.

But managing at international level with its months of reflection between games is one thing; managing the biggest club in the world with the demands that go with it is another.

Surely it would be a case of too much too soon for the 38-year-old?

“I’m not sure it would,” says Wales No.2 Osian Roberts, whose role as the Welsh Football Trust’s technical director has seen him coach the best young coaches around as they seek to win their official badges. “It is not as if he is starting from scratch. He is someone, like Josep Guardiola at Barcelona, who has been at the club for a very long time with an impeccable playing career. He knows everything about the place from the young talent coming through to every colour scheme there’s ever been in the corridor at Carrington. He knows the fabric of the club, how it ticks from day to day.

“Most importantly, he will have started taking a lot of notice about what Sir Alex, Mike Phelan and Rene Meulensteen, the first-team coach, do and how they deal with situations.

“He’ll have a good grip on how he’d like to do things because he’s been the one playing in European finals and not being able to get near the ball against Barcelona. He’s probably had the best ever apprenticeship in football. He’s been studying a 20-year degree in football.”

Roberts is clearly not alone in the view that Giggs could make a success of the role with Paul Scholes recently admitting he saw his team-mate as the man for the job.

But it is Ferguson’s view that would hold greater sway. According to seasoned United observers, it was a lack of influence over his successor that was partly behind his retirement U-turn in 2002. There would be no such fears about legacies if Giggs, rather than say Mourinho, was appointed.

And as David Gill, United’s chief executive, said in 2010: “I think Alex will be the key. He knows people. He will have a big role in advising and being a sounding board.”

Giggs has stated his intentions are to go into management – going as far to say it would be an ambition to manage Wales one day and hence why the FAW will keep going back to try their luck.

And he has begun studying for his coaching badges, only a question of timing and a summer scheduling clash behind why he is completing his courses with the English rather than the Welsh FA as old colleague Gary Speed had done.

Furthermore, in a recent interview with the magazine Inside United, Giggs outlined how his dressing room role has developed over the years. The way he describes his methods and responsibilities, it’s already clear he is part of Ferguson’s management team.

“There is a responsibility and I think that comes when these young players are either injured, aren’t playing or have lost form. That’s when, really, you need to help them,” Giggs said.

“It’s that tier from the coaching staff to the dressing room – these are the things you see first hand. It’s especially so for me because I don’t play every game so sometimes you’re watching games and you see things that can help young players. It might be the littlest pointer that can help them, but ultimately it’s just reminding them what they’re good at, about the importance of training hard, and to put quality into their training. And sooner or later, when they have a little bit of bad form, it will all come back to them.”

However, there are others further down the line than Giggs. Scholes, before his return out of retirement, had begun coaching in the United youth team. Ole Gunnar Solskjaer cut his teeth successfully as United reserve manager. Certainly in the case of the latter, who won the Norweigian title with Molde in his first year, he is further ahead tactically while also understanding the ethos of Ferguson’s United.

“He had his stripes coaching every day, but ultimately results do not matter in reserve football and it is interesting he was sent away to get that first-team experience,” admits Roberts. “But, as I mentioned with Guardiola, it is not always necessary when you have that understanding. You never know how things come around and what’s around the corner in life. But in an ideal world you would hope Ryan has another three years before Ferguson goes and that could be important in giving him that extra bit of time.

“Overall, though, I have no doubts he could make the step.”