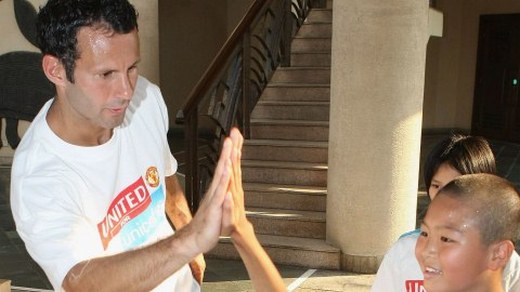 Ryan Giggs says one of the most enjoyable aspects of pre-season tours is the opportunity the squad has to lend support to the work of the Manchester United Foundation.

The Reds have confirmed five friendly matches in Asia and Australia during Tour 2013, presented by Aon, in July, with a sixth to come in Sweden in August. The team will kick things off in Bangkok, before heading to Sydney for their one and only tour match in Australia. Two games in Japan will follow, before a match in Hong Kong. The Reds then travel to Stockholm on 6 August to face AIK.

Amid the players busy tour schedule and preparations for the new season will be a number of Foundation events and visits into communities around the worldwide, which Giggs insists the players want to get involved in.

"They are very humbling experiences," he told ManUtd.com. "We’ve been involved with charities like UNICEF for a long time and it’s great to be able to make a difference first-hand. We have fundraising events and we try to help raise awareness from here, but when we’ve been to the likes of South Africa and Thailand we’re able to visit AIDS centres and orphanages and you can see the great work UNICEF do and the difference that the players and staff can make. It’s something that we look forward to getting involved in and we all get a lot of out of the experiences."

Watch exclusive interview with Ryan below.