Ryan Giggs is preparing for life after playing by taking an intensive coaching assignment in Turkey.

While many of his teammates will be sunning themselves in exotic beach resorts around the world, Giggs will travel to Turkey for the U20 World Cup for eight days as he bids to secure his UEFA Pro Licence coaching badge.

If he passes his latest test, Giggs may become the first active British footballer to complete the mandatory qualifications for Europe’s top-level coaches.

Giggs, 39, is about to embark on his 24th top fight season with Manchester United is looking ahead to the time when he will have to hang up his boots. 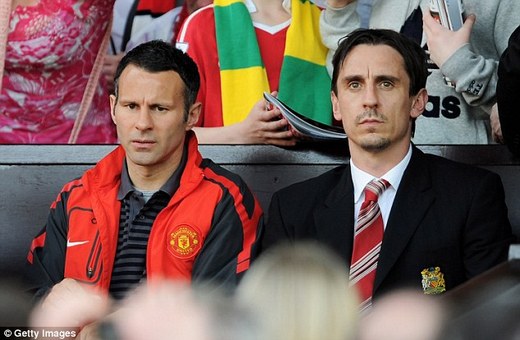 Giggs and Gary Neville are both taking their pro-license

The Welsh forward will travel with Gary Neville and Paul Ince – two ex-teammates – where they will watch up to ten matches, from which they will be asked to undertake a series of tasks and complete a case study that each individual has been working on.

Giggs signed a one-year contract extension meaning he will carry on playing for United until at least the end of next season.

But the Welshman took on some coaching duties at Old Trafford last season and will continue to do so under David Moyes to complete his Pro Licence by next summer.

He is expected to take a lead role on Moyes’s coaching staff and has been tipped as a potential future United manager.

Giggs has already gained his UEFA A and B licences and is halfway through his elite licence which is required by anyone wanting to coach in the top division or in Europe.