Manchester United legends Ryan Giggs and Gary Neville turned up on Friday to have a look around the site of the 'football hotel' they are building.
Another United old boy Paul Scholes was also spotted, taking a training session with children at the Ivybridge Community College.
Giggs and Neville have launched a joint hospitality company – GG Hospitality – with ambitions of developing a worldwide football-themed hotel and restaurant empire. 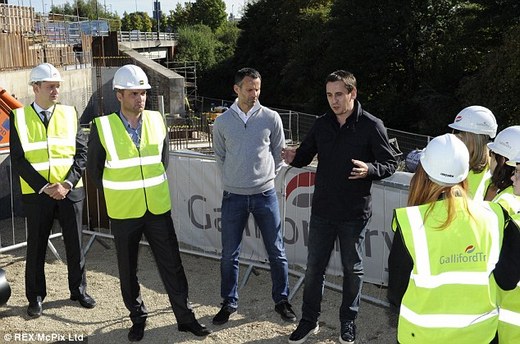 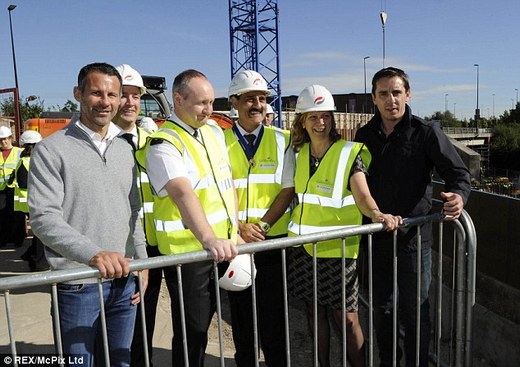 Big plans: They hope that the company will eventually own hotels all over the world 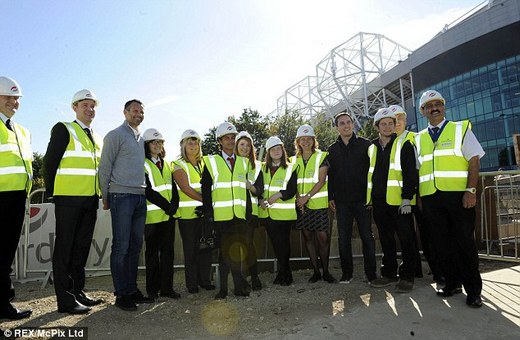 Nearby: The hotel will be in the shadow of Old Trafford and is a great location for football fans
The first hotel, being built right next to Old Trafford, will be a 138-bed venue with a five-a-side pitch on the roof.
The 10-storey building will also house a supporters club, and Neville has previously said it will play host to up to 1,250 fans before matches.
Giggs and Neville were on site and pictured talking to the builders who are working on the project.
According to 'Caterer and Hotelkeeper', Hotel Football is costing £20million as the players link up with two Singaporean businessmen - Kiam Ho and Andy Yun - as the major shareholders. 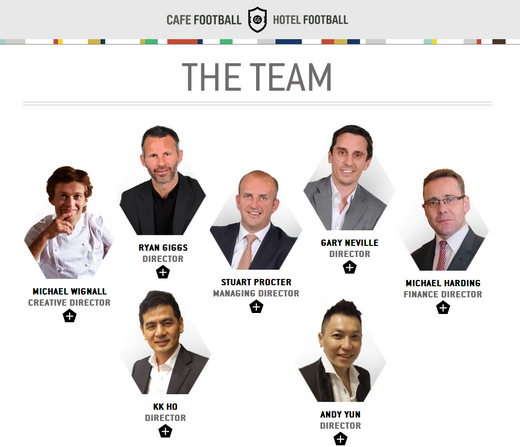 Plans: The GG Hospitality team on their website
Friends of the footballers as well as some fellow players are also reported to be involved in the project.
It is unknown how much money that Neville and Giggs are committing themselves to the company GG Hospitality.
It will be the parent company of Cafe Football, with the first restaurant outlet to open its doors in the Westfield Centre in Stratford later this year.
It is expected to seat around 120 people and will be offering affordable food, with two courses available for £16-per-head.
Giggs said: 'We have lived and breathed every element of this for a considerable time now and have been involved in every detail, every step of the way. We've stayed in lots of hotels as footballers and often felt that we could do a better job.
'We have left nothing to chance and are working with some of the best people in the business to achieve our vision'.
Giggs also confirmed that there will be subtle hints of football visible around the hotel, although the pair will not go so far as to allow football shirts to adorn the walls.
The hotel is said to be targeting the three-to-four star market and will be charging between £80 and £150 per night.
In the long term, there are ambitions to expand the restaurants and hotels to other cities with a vibrant footballing identity, including Liverpool and Birmingham while the chain could also go global with football-mad Asia earmarked as a particularly fertile area for expansion.