Manchester United’s blistering start to the season may have benefited from an injection of youth, with the likes of Tom Cleverley, Chris Smalling and Phil Jones all impressing as Fergie’s latest fledglings.

But with his side a goal down to Benfica in the club's Champions League opener, it was the Scot’s most experienced devotee, Ryan Giggs, who dragged the visiting team out of the darkness at the Stadium of Light.

Not that we should be surprised. At 37 years and 289 days old, the Welshman broke his own record as the competition’s oldest scorer and even more impressively, picked up his 29th goal in 16 Champions League campaigns.

Fittingly, Giggs’ strike in Lisbon came 17 years to the day on which he opened his account in the competition, when he hit a brace against Gothenburg at Old Trafford on Sept. 14, 1994.

Goal.com has rounded up every finish since to celebrate yet another astonishing achievement from the Premier League champions’ evergreen Welsh wizard.

It was 17 years to the day of his strike in Portugal, when Giggs benefited from some horrific defending from the Swedish side to slam home from 10 yards out after the visiting team failed to clear Mark Hughes’ squared ball in the area.

The Welshman then made it 3-2 with a simple tap in from point blank range after latching on to a save from Paul Ince’s fantastic 35-yard strike. 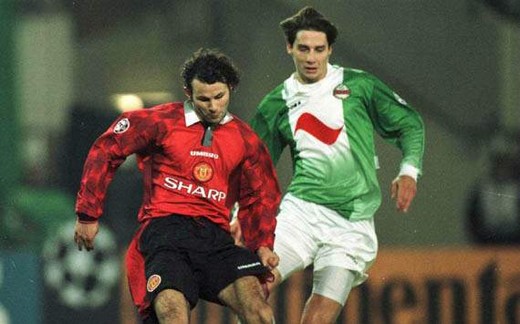 Arguably the United legend’s finest goal on the European stage, Giggs picked up the ball in the center circle before starting a seamless one-two with Eric Cantona. He then collected the ball again and coolly slotted home. A fine example of United at its devastating best on the break in the mid-1990s.

Giggs secured the three points for Ferguson’s side with an unstoppable top-corner effort after man of the match Teddy Sheringham had set him up perfectly from the left flank.

The Welshman outpaced the entire Porto defense down the left of the box before slamming an unstoppable drilled effort inside now Chelsea goalkeeper Hilario’s near post to give the Red Devils their third of the night.

Expertly finished with the outside of his left boot following on from Paul Scholes’s knock down to give Boguslaw Wyparlo no chance and United a fine start to the qualification tie which kicked off the treble season.

Put the home side ahead in a true group stage epic by getting on the end of David Beckham’s deep cross from the right and lofting a weighted header past the helpless Ruud Hesp. 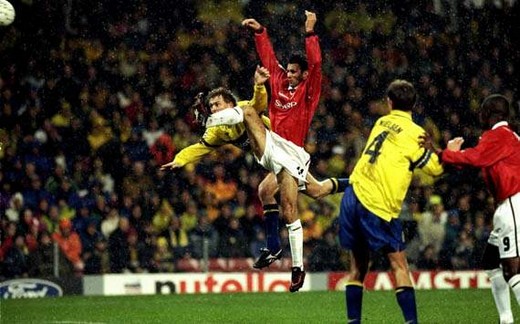 The Welshman made the most of a Kenneth Rasmussen fumble in the Danes’ area following Roy Keane’s cross and simply tapped home into an empty net to begin the rout.

Giggs then doubled his total with superb close-range header after meeting Jesper Blomqvist’s dangerous looking ball from the left channel. 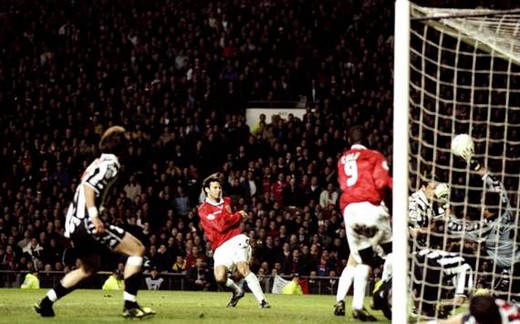 Kept the eventual treble winners in the tie with a scrappy 91st minute equalizer from five yards out to send United to Turin on level terms, ensuring the tie remained in the balance and that the Italian side’s away goal eventually proved fruitless. 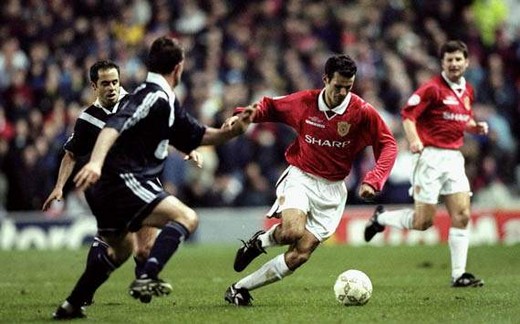 The winger was the beneficiary of his own lung-busting run into the area to meet David Beckham’s cross on the half volley to give United the lead over the Ligue 1 side. 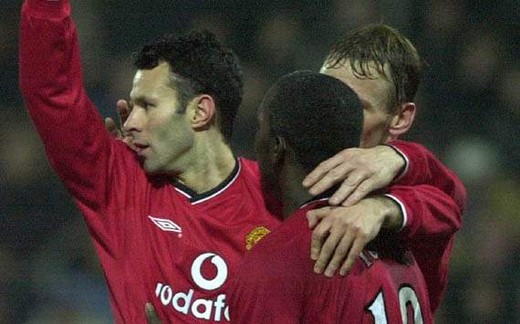 Giggs doubled United’s advantage in Austria with a rasping effort past Kazimierz Sidorczuk after being put through brilliantly by Dwight Yorke. The former Wales skipper left the Greek side’s defense in his dust to meet an inch-perfect through ball by Juan Sebastian Veron before knocking a simple effort home to secure the host side's qualification to the second round. 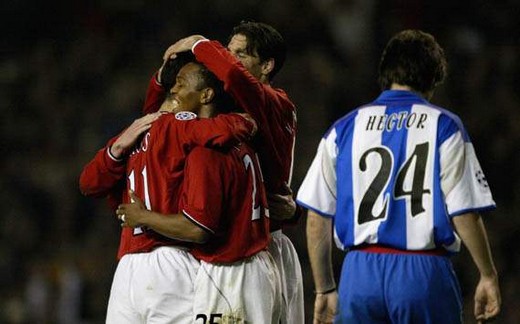 Sir Alex Ferguson celebrated his 100th European game as manager by seeing his side make it through to the semifinals and Giggs’ goal, a fine solo effort past Jose Francisco Molina after drifting in from the left, was the best of the bunch. 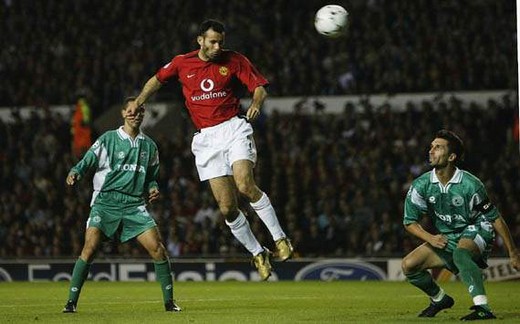 Giggs nodded a glanced header home from close-range after latching on to a superb Phil Neville cross to put the home side on its way to a winning start to its European campaign.

The winger opened the scoring for United with left-footed finish from a few yards out after reacting quickest to Paul Scholes’ squared ball across the area.

Despite looking very much like an own goal, Giggs was given it after he saw his attempted cross for Scholes take a nick off the foot of Georgios Amanatidis and past the helpless Dimitrios Eleftheropoulos.

Giggs came off the bench to replace Diego Forlan early on and took only 10 minutes to get on the scoresheet by concluding a fine counterattacking move including contributions from David Beckham, Ole Gunnar Solskjaer and Juan Sebastian Veron. The Welshman then doubled his, and United’s tally with a phenomenal solo effort by finishing with his right foot after a mazy run to secure the Red Devils’ passage to the quarterfinals.

Atoned for an embarrassing first half miss by linking up well with Ruud van Nistelrooy on the left flank before sliding a cool finish past Timo Hildebrand to double United’s lead and all but secure the points.

Having been put through by Paul Scholes, the Welsh wizard expertly skipped past Bucharest ‘keeper Vladimir Gaev before knocking it in with the goal at his mercy to equalize in Romania. The Welshman latched onto a superb Kleberson cross from the left wing before nodding home a glancing header to give United the lead before Wayne Rooney stole the headlines with a hat trick on his debut. 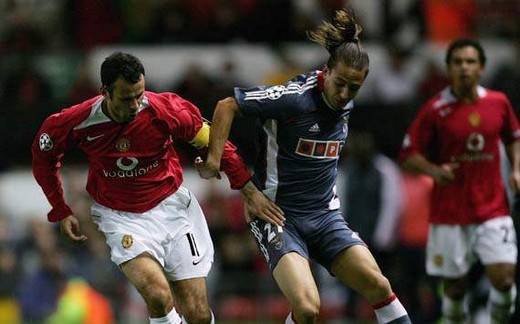 Giggs benefited from a wicked deflection to score a 30-yard free kick to give the home side the lead shortly before the halftime whistle at Old Trafford. The host side turned it around at the Theater of Dreams as Giggs latched on a Cristiano Ronaldo cross to nod past Portuguese goalkeeper Quim and take his record to 12 consecutive seasons in which he had scored in the Champions League. 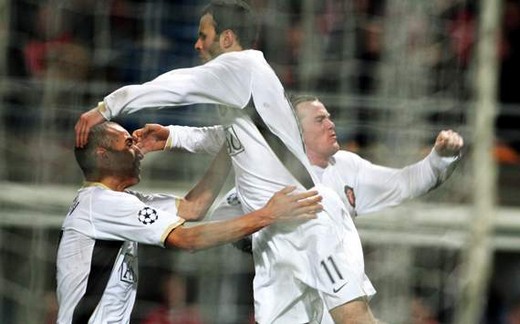 A strike surrounded in controversy, Giggs curled in a late free kick before the Lille wall had been fully assembled and referee Eric Braamhaar allowed it to stand, nearly causing a mass walk-out by the French side. Giggs saved United with only six minutes left by pouncing on an Artur Boruc save to head home from point blank range after the Pole had kept out an effort from Cristiano Ronaldo. Giggs secured his 150th goal for the club to equalize at Old Trafford after seeing his deflected free kick fortuitously bounce off Christian Gentner shortly before the hour mark. The Welshman finally broke Manuel Neuer’s resolve with a calm finish between the irrepressible German’s legs after latching onto a pinpoint Wayne Rooney through ball. 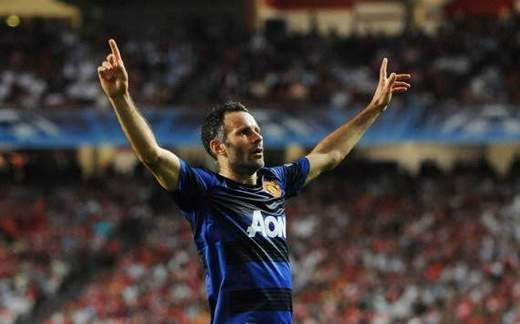 With Ferguson’s side facing an opening group game defeat, Giggs extended his record of being the Champions League’s oldest-ever goalscorer with a flying effort from 20 yards out to secure his side a point.