After 23 seasons of unparelleled success in English football’s top flight, there is something strange about hearing Manchester United legend Ryan Giggs describe himself as a novice.

But that’s exactly what the 13-time Premier League winner is feeling as he begins to face the reality of life after playing and the prospect of embarking on a career in coaching and management.

“It’ll be like starting all over again, it will be like being an apprentice again, learning things and making mistakes as you go along and just trying to better yourself as much as you can,” explained the 39 year-old, who is currently in Turkey attending the FIFA U20 World Cup as part of the UEFA Pro Licence course. 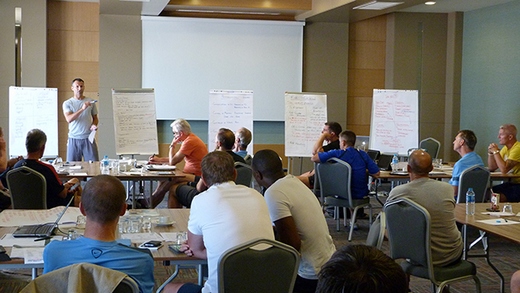 If the Welshman successfully completes the 18-month-long course, the highest qualification in the football industry, he will be one of first players to hold the award whilst still playing.

“I am an intense person and when I’m playing I’m concentrating on that,” he explained exclusively to TheFA.com.

“Also, I’ve got to start thinking that it’s near the end and what I’m going to do afterwards.

“It’s exciting for me. I’ve been playing for twenty-odd years and it’s a new chapter in my life. I want to do well and I want to make a success of it as I did as a player."

The man who has just departed Old Trafford hot-seat after 26 years has provided Giggs with the perfect managerial mentor.

However, it is not only Sir Alex Ferguson who has helped Giggs learn about the key skills of management. He has also been part of an experienced group of players tasked with maintaining the club standards in the champions’ dressing room.

“Obviously I’d be stupid not to pick up on bits that I’ve learned from the [former] manager [Sir Alex Ferguson],” he explained, before adding: “The players manage the dressing room, which is important really.

"The manager doesn’t want to be dealing with little problems in the changing room all the time.

“I think it’s important that you’re self-disciplined in the changing room and that the standards are set.

"You have to make sure you stand by those both on and off the pitch with regards training, looking after yourself and making sure you get the right rest to ensure you produce the best football." 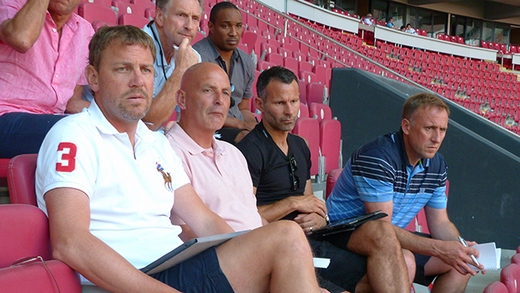 Giggs’s insight into the dressing room culture which helped Manchester United secure their 20th title last season also says much about why the midfielder is on the brink of beginning an unsurpassed 24th season at the pinnacle of the English game.

Drawing on the expertise of others has been the key to Giggs’s longevity.

“You use everything you can to better yourself. Whether it’s talking to the coaches, talking to the other players, the dieticians, the sports scientists, you try and pick their brains as much as you can for your benefit.

“From Monday through to the game on Saturday you try and make sure you’re peaking on that Saturday. You build up your week for that game at the weekend.