Gary Neville is doing a tour of his new property. And he is rather taken aback by the condition of the facilities. Eyeing the shabby urinals, with the ruptured piping, the leaking roof, the floor so splattered with uninvited stains it appears to have been used as a practice canvas by Jackson Pollock, he turns to his guide and says: “So basically it’s a centre-forward or new toilets.” To which his guide, with a weary sigh, replies: “To be honest, we could use both.”

Class of 92: Out of Their League is a new three-part BBC documentary series which details the first season as club owners of five of the country’s most celebrated former footballers. Neville and his brother Phil, together with their former Manchester United colleagues Ryan Giggs, Nicky Butt and Paul Scholes bought Salford City FC last year (David Beckham was otherwise engaged trying to set up a football club in the United States).

And they invited the television cameras to follow their every move across their first season in control. Which, given the intimacies that are subsequently revealed might come as something of a surprise from a quintet brought up in the give-nothing-away school of Sir Alex Ferguson’s United.

At one point a coach is fired on camera. At another the star striker is filmed sitting on the toilet, clearing his mind pre-match. Meanwhile, Neville is obliged to intervene after it is discovered the television in the bar has an illegal Sky TV stream (“Imagine if it got out that Gary Neville of Sky Sports owns a club where they don’t pay the subscription,” he tells the camera).

“We thought about it,” said Giggs of allowing the cameras in to watch their progress. “And we thought we might regret it in future if we didn’t do it now. This could be history.” Giggs, taking time off from his day job as United’s assistant manager, was talking at the first screening of the film, shown at the swish new Home arts centre in Manchester. 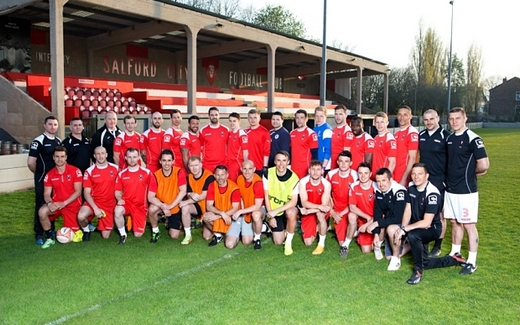 Here the chorizo and hummus crostini on offer were on a different culinary level to the burgers served in the catering truck at Salford City. Indeed the contrast between the comfortably remunerated quintet and the club they have taken over is at the heart of this hugely entertaining documentary. In their magnificent gated mansions, we see the fivesome plot the next moves for a club where, as the loose-bowelled star striker puts it, “15 players are queuing up for three cold showers and there’s one towel between nine of us.” Welcome to non-League football, lads.

“It’s been a learning curve all right,” said Butt. “But we’ve totally fallen in love with it, basically.” Like most of the business interests the five have undertaken since they hung up their boots – the cafe, the hotel, the property developments in Dubai – the idea came from Neville.

“When Gary mentions something you normally end up doing it anyway, you don’t get any choice in the matter,” said Scholes. “Though to be fair most of them work out OK.”

Giggs recalled that the plan had been hatched during a train journey. “We all took our coaching badges, but that might not last,” he said. “We could be out on our ear this time next year. We wanted something looking ahead 10, 20 years. This was there in front of us. It meant a lot to us, the place itself, it’s the city we grew up in. It was a no-brainer.”

What is clear from the film is the manner in which the five’s footballing upbringing has influenced their way of doing business. These are owners who take it seriously. One of the quintet is at every game, not in the directors’ box, but standing on the grass bank of a terrace, anorak hood pulled up against the Salford drizzle, watching and learning.

As he was as a full-back, Gary Neville, in particular, is relentlessly busy, anxious to be involved in every aspect of the club’s running. His wife calls him a control freak on camera. Which is an accusation he finds hard to deny: “She says I’m a control freak,” he says. “But it’s more I just like to know what’s going on.” 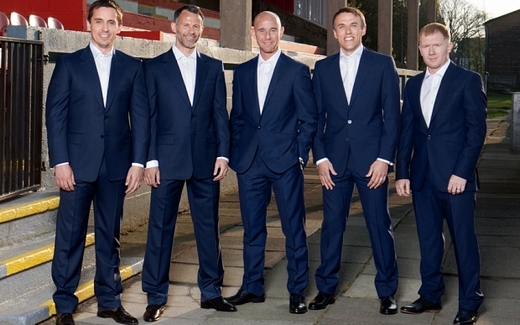 Clearly, some are suspicious of the new arrivals. There are diehard Salford fans featured in the film who wonder what the club can gain from association with their celebrated new owners. Not fired up by Neville’s ambition, they go to Salford because they like its backwater homeliness.

As one of them puts it: “If you want the big circus, go down the road to Old Trafford.” The local paper even dubs the fivesome “The Class of Vincent Tan” after they change the shirt colour from orange to red. But Scholes said the owners were not swayed by worries about upsetting the hard core.

“Look, we want them to come with us,” he said. “They are the club, it is them who have kept it going down the years. But I can’t believe they don’t want it to get better, to improve, to get into the Football League. Who wouldn’t want that?”

The biggest issue they had with the fans was when they announced that between them they had sold 50 per cent of the shares to the Singapore billionaire Peter Lin, a man who had once tried to buy Liverpool and is the owner of Phil Neville’s current employer, Valencia. Though the suspicion appears to have cut both ways. “I think he was a bit surprised when we first showed him round,” said Butt. “He was like: where’s the Premier League lads? But he saw what we want to do. And we needed his input if we were going to take this club to the next level. Believe me, we haven’t got the money to do what we need to do on our own.”

Across the course of the three-part series, the passions run high, the tensions mount, the language ripens. So ripe does it get, indeed, the director suggested that after editing out the industrial tones from a particularly fraught team talk all he was left with were the words “but”, “and” and “corner”.

But still, something seemed to work. At the end of their first year in control, Salford were promoted to the Northern Premier League Premier Division, the highest level in their history. And the association with the famous new owners had seen the biggest jump in attendances of any club in England, up by 40 per cent.

“Our aspirations are eventually to get in the Football League, with a 25,000-seater stadium, why not?” says Giggs. “We don’t know how long that might long take, but that’s part of excitement. We’re in this for the long haul.”

Class of 92: Out of Their League is to be screened on BBC Television in September.