Wayne Rooney and substitutes Jesse Lingard and Adnan Januzaj fired Manchester United to a 3-1 victory over the current European champions Barcelona in a hugely enjoyable contest at Levi’s Stadium on Saturday.
The Reds were ahead on eight minutes through Rooney’s bullet header, having survived an early scare when Luis Suarez hit the post, before Lingard and Januzaj came off the bench to seal the victory with two smart finishes either side of Rafinha's late belter for Barcelona.
After missing the first two games of the tour, David De Gea returned in goal behind the same back four – Matteo Darmian, Phil Jones, Daley Blind and Luke Shaw - which has started all three tour matches so far. In fact the only change to the Reds' line-up from the opening two games was De Gea’s inclusion. United’s attacking six remained the same – Michael Carrick, Morgan Schneiderlin, Juan Mata, Ashley Young, Memphis Depay and Rooney. 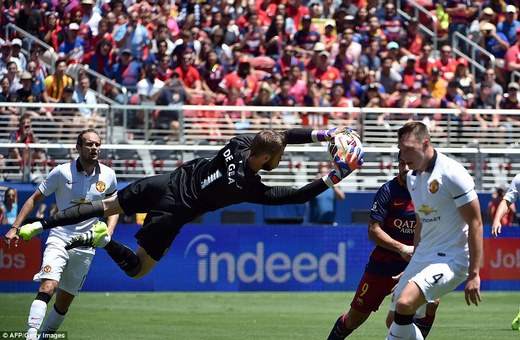 Barcelona had the best of the opening chances with Suarez hitting the post with an impressive free-kick, while De Gea pulled off an excellent save from Sergi Roberto when the Barca man was clean through.
After the European champions’ early dominance, Louis van Gaal’s men made their mark on eight minutes when Rooney, unmarked in the box, headed the Reds in front from a Young corner. 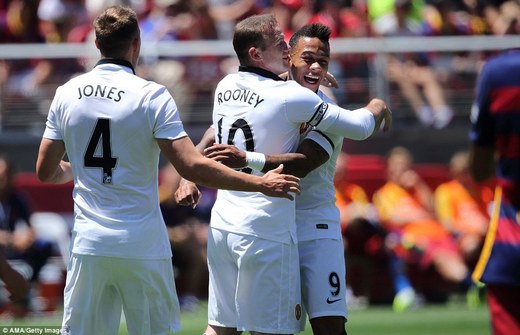 The skipper was given another sight of goal on 25 minutes when he rounded Ter Stegen but the tight angle enabled the Barca goalkeeper to recover in time to block Rooney’s centre.
Stegen was called into action three minutes later when he was forced into a somewhat unorthodox block from Young’s curling effort. Two minutes later at the other end, De Gea made a flying leap to claim Roberto’s dangerous cross in mid-air as Suarez and co. threatened to pounce.
There was pandemonium in the Barca box just after the half hour when Darmian burst down the right and sent the ball in. Rooney and Young both had chances – there was also a penalty appeal for a foul on Young - and it was only after some heroics from former United star Gerard Pique and his fellow defenders that Barca managed to clear the danger.
Another De Gea save was followed by two good efforts from Barca dangerman Suarez. After he had hit the post for the second time in the game, with a curling effort from the edge of the box, United's no.1 dived to stop a low shot from Uruguayan.
The attack, attack, attack mentality of both teams continued after the break with Memphis and Rooney both testing Stegen early on.
Ivan Rakitic curled a free-kick inches over the bar just before the hour, while Suarez had a goal disallowed soon afterwards for offside.
Just as he said he would in his pre-match press conference, van Gaal made 11 changes around the hour mark - in the 63rd minute to be precise. Off went the starting XI and on came Sam Johnstone, Antonio Valencia (for his first game of the tour), Chris Smalling, Paddy McNair, Tyler Blackett, Jesse Lingard, Marouane Fellaini, Ander Herrera, James Wilson, Andreas Pereira and Adnan Januzaj. 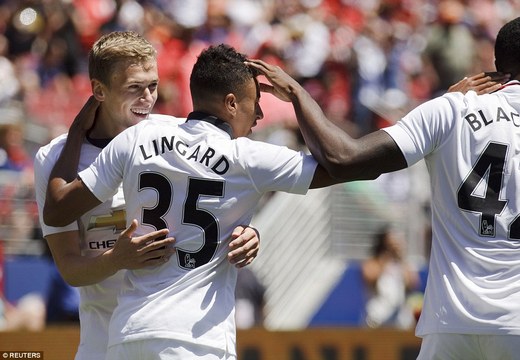 The new arrivals had an instant impact - a flowing move forward from the Reds on 65 minutes allowed Blackett to break down the left and his cut-back found Lingard who smashed home.
Barca weren’t about to give up though and they hit the woodwork again on 72 minutes. A free-kick from the right found Munir El Haddadi and his header flew back off the post.
United’s new front four of Lingard, Januzaj, Pereira and Wilson looked particularly lively, while the Reds remained solid in defence, despite the various changes to the back line. 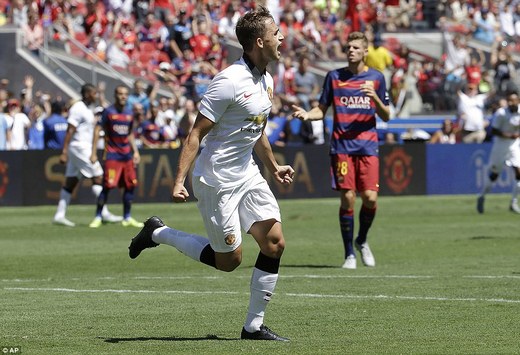 Johnstone and his colleagues were powerless to stop Rafinha’s sublime volley in injury time but United had the last word at the other end when Januzaj took a touch in the box before sliding a lovely finish past Masip to ensure a memorable win.

Check out the best images as Louis van Gaal's side beat the European Champions in Santa Clara.