Managers have different attributes – some are astute coaches, some may be fine tacticians or brilliant at man‑management. This game was a triumph for the experienced tactical brain of Sir Alex Ferguson. He gambled and won hands down, and his opposite number could not answer any of the questions his team posed.

When Mark Noble put West Ham United ahead after 11 minutes, Ryan Giggs's only involvement had been swinging three corner kicks in to the West Ham box. He was to take many more – Manchester United forced 16 in total – but more importantly he became a vital catalyst to this performance. The selection of Park Ji-sung, playing off Wayne Rooney, with Antonio Valencia and Giggs as wide supporters, caused some surprise but with their pre-game lead in the title race in mind and Chelsea looming on Wednesday, a watching brief for Javier Hernández and Dimitar Berbatov was almost understandable. 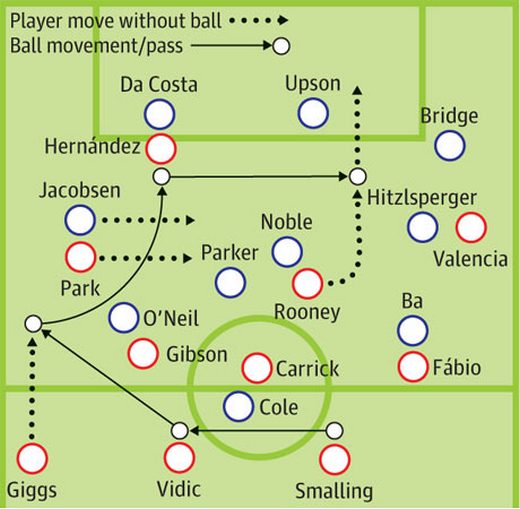 Back to front: Ryan Giggs enjoyed second-half freedom to attack from deep as Gary O'Neil tucked in and Manchester United gambled. Photograph: Graphic

United's play in the early part was smooth enough, with the industrious Park linking and overloading in the middle third to give Darron Gibson and Michael Carrick ascendancy. But nearing the 18‑yard box the threat lacked a finish.

With West Ham 2-0 ahead Ferguson's half-time substitution – Hernández for Patrice Evra – was not a surprise. Giggs was dispatched to left-back – an eyebrow-raiser but brave and ultimately crucial, a move by a manager destined to be a winner again. Accurate service was required from deep and with two forward targets, Giggs was in his element.

Greater pressure was placed on Nemanja Vidic and Chris Smalling, with Giggs and Fabio da Silva auxiliary wingers, but fortune favours the brave. Maybe Matthew Upson was a shade unlucky to concede the Rooney penalty, but West Ham never escaped from their second‑half straitjacket.

With Smalling, Vidic and Carrick all feeding the evergreen veteran, Giggs enjoyed the space and made the fourth as he rampaged forward with Gary O'Neil tucking in to help his overworked colleagues. United gave a masterclass in speedy, unselfish passing and movement. They looked champions.