Ryan Giggs running down the wing, beating defenders with pace or skill has been a feature of Manchester United's play over the past two decades.

This season, however, young pretender Adnan Januzaj has stolen some of the limelight with his trickery out wide and has been one of the few bright spots of a dismal campaign.

So, to find out who has the skills - master Giggs or apprentice Adnan - the pair took part in the DHL Trick Challenge at their Aon Training Complex at Carrington on Tuesday.

Set the challenge of performing some moves by a freestyler, Giggs and Januzaj try with mixed fortunes before the roles are reversed. 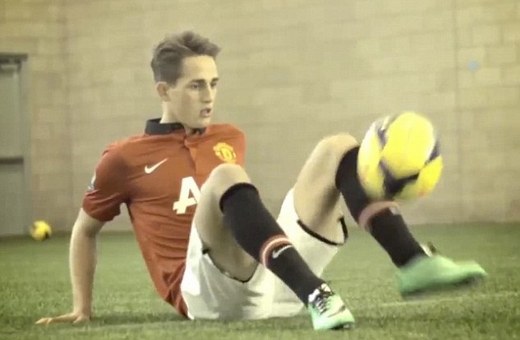 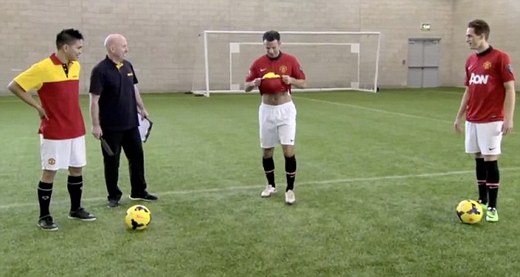 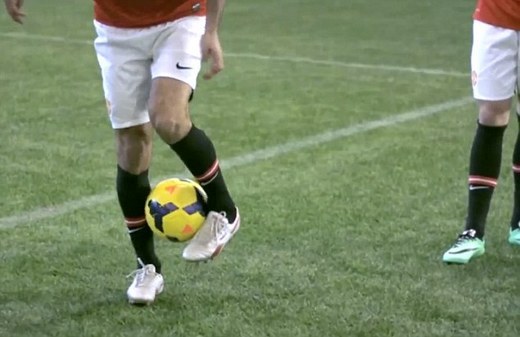 There have been a lot of comparisons between the two players with their style of play, as 18-year-old Januzaj has had a breakthrough season, despite United's struggles under new manager David Moyes.

Speaking of players he has aspired to the Kosovo-born youngster admits that Giggs is one of them. He said: 'Of course [I looked up to] Ryan, Messi and Riquelme because they're all skillful players.'

The transition from academy football to breaking into the first team has been a smooth one for the young midfielder, who has put in some important performances for the club this season.

However, the red half of Manchester have found it more difficult since their iconic former boss Sir Alex Ferguson retired at the end of the last campaign.

At the end of February, the club suffered an embarrasing 2-0 first leg defeat at Olympiacos in the last 16 of the Champions League and domestically they sit seventh in the table trailing 'noisy neighbours' Manchester City by 12 points in the race for fourth spot - having played a game more.

For United, their next Premier League fixture is an away trip to West Bromwich Albion on Saturday - with the Baggies having already secured an historic 2-1 win in the reverse match earlier in the season.

That win for the Baggies was their first at the Theatre of Dreams since 1978, as other visiting teams such as Newcastle and Everton have recorded landmark wins at the reigning league champions.