Ryan Giggs has revealed how he wept in his car the day he feared he was saying goodbye to Manchester United for the last time.

Giggs spent the last four games of last season as United’s interim manager in the wake of the sacking of David Moyes.

The 40-year-old Old Trafford legend has subsequently been invited on to new manager Louis van Gaal’s coaching staff and will remain at the club, even though his playing days are now over.

However Giggs has now spoken for the first time about the moment he feared his life at his one-and-only club may be over.

‘I was saying goodbye to the players, thanking them.

‘Potentially saying goodbye to a lot of players for the last time, a bit of staff, and I’m not an emotional... well, I didn’t think I was.

‘I’m not a really emotional person but my car was parked right outside and I thought: "I need to get in my car here".

‘I could feel myself getting emotional. So I get in my car and I just went, started crying, started getting really emotional and I think it was just a mixture of what I’ve just said, saying goodbye to people for maybe the last time, and the pressure that I put myself under.

‘So I came out the airport and I came at the lights and Nicky Butt has just pulled up next to me and I’m thinking, "F***ing hell, I can’t let Butty know that I’ve just been crying".

‘So I just give him a little wave and just looked the other way and waited for the lights to go green.’

A revealing insight in to Giggs’ final year as a player at United will be seen on TV on Thursday night in ITV’s Life of Ryan: Caretaker Manager, which will be shown at 9pm.

Understandably, most of the programme concentrates on the former Wales star’s four games as manager.

Giggs reveals how his sleep dwindled to less than five hours a night as his time in charge wore on and tells of his anger after United lost at home to Sunderland in his second game in charge.

‘I was upset after the game but the longer it’s gone on since, I have just got angrier and angrier, slept less and less and just, you can’t have it, you just can’t have it,’ he revealed.

‘If any of them want to come and see me and ask me why they’re not playing then I’ll tell them and I don’t think they’ll have a leg to stand on.

‘I mean, I just, I was stood on the side against Sunderland just wishing I’d named myself as a substitute so I could something about it.

‘I bet every manager thinks like that, but I’m in a position where I’m still playing and can still affect the game.

‘For 20 years Sir Alex Ferguson used to say, "Wait until all you lot are managers and you’ll find out how hard it is to pick a team, to leave good players out", and I was just say there going: "Yeah, yeah, yeah, whatever".

‘You can prep as much as you can, but until it comes down to actually living it day in, day out, you can never prepare for it.

‘I was really, really down after that game and you know, that won’t happen again.

‘We prepared right, we knew that Sunderland were gonna be a tough team because they were on a good run, and you just pick a team and what I did was I picked a team that I thought could win the game and I trusted the players.

‘But some of the players let me down and let themselves down. Maybe I was a little bit too soft.

‘I don’t care where you are in the league and I don’t care if the results have been going badly, if you step on to that pitch as a United player you give it your all, and if you don’t then you deserve not to play the next game.

‘I think I’ve always had a will to win. From an early age I was used to winning and it’s that fear of losing because you know losing is a much bigger emotion than winning.

‘When you win it’s great, but then it goes away. When you lose, it’s not great, but it doesn’t go away for a long, long time.’ 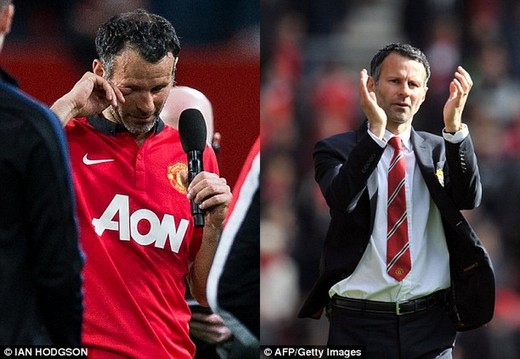 Thursday night’s programme features behind the scenes footage of Giggs as a manager at United’s training ground. It shows him parking in Ferguson’s old parking space and trying to settle in to his old office.

‘My approach is look at it as though I am going to be in this office for a long time,’ he revealed.

Beckham, for example, reveals he was a bit jealous of seeing Giggs and his hastily-assembled backroom staff in the dugout for their first game as a management team at home to Norwich. Ferguson, meanwhile, calls him a ‘freak of an athlete’ and labels him one of the top three players ever to play for United.

‘The others you can argue about,’ said Ferguson.

Gary Neville, meanwhile, said: ‘You usually have to wait 20 years or until you're are dead to get a statue built but Ryan should have one now.

‘When I’ve spoken to him, he’s now starting to have five hour sleeps so he’s, you know, he’s in the real world with the other coaches and managers, taking every sort of little problem to bed with him, thinking about how he’s gonna leave players out.

‘He, you know, as a manager you have to make big decisions and obviously that’s something that all managers will tell you and he is absolutely capable of making big decisions.’

With Giggs now on holiday until pre-season, he has spoken of his enthusiasm about working as assistant to Van Gaal.

‘I have met him and I liked him immediately,’ he said. ‘I am looking forward to working with him and learning from him.’

Having played for 23 years at United, Giggs almost scored on his farewell appearance against Hull last month. ‘Playing at Old Trafford makes you feel taller and stronger,’ he said. ‘I loved it. I wanted those feelings to last for ever.’