Manchester United tasted defeat once again at the Liberty Stadium as Swansea City recorded a second successive 2-1 win over the Reds in South Wales.
It was Swansea's fourth win in five league and cup matches over United in what turned out to be a disappointing 50th match in charge for Louis van Gaal.
After a goalless first half, the Reds started the second period on top and went ahead through Juan Mata's close-range finish. The advantage was shortlived, however, when Garry Monk's side drew level 12 minutes later through Andre Ayew's header. The Swans took the lead five minutes later when Ayew set up Bafetimbi Gomis to slot home.
Ander Herrera kept his place in the starting XI after his goalscoring exploits in midweek against Club Brugge and began just behind Wayne Rooney in the no.10 role. Morgan Schneiderlin and Bastian Schweinsteiger were also back in the XI in two deep-lying midfield positions.
The Reds had a score to settle with Swansea having lost three of the last four league and cup meetings, including two defeats last term. And, two minutes in, United drew the first save of the match from Lukasz Fabianski who dived low to his left to push away Memphis Depay’s well-struck free-kick. Seconds later, Mata flashed an effort over the bar after some more positive play from United. 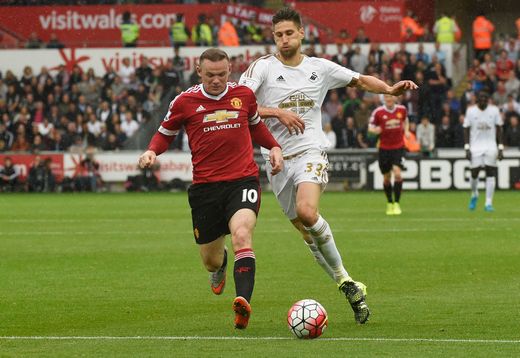 It took a while before the Reds’ next sight of goal came – on 19 minutes – and Swansea had their captain Ashley Williams to thank after he got across to steal the ball off Rooney’s toe after a sublime pass from Luke Shaw. Two minutes later, Memphis cut inside from the left, found Herrera who turned well inside the box and immediately found Mata who, under pressure from defenders, fired an effort just wide of Fabianski’s left-hand post.
Having offered very little in attack up to that point, Swansea suddenly had three opportunities in as many minutes. Jonjo Shelvey free-kick was flicked on by Gomis to Gylfi Sigurdsson who flashed a low drive inches wide of the post with Sergio Romero beaten. The Argentinian stopper then presented possession to Shelvey 25 yards out. He pinged an effort immediately towards goal but Romero managed to get back in position to claim. The Swans then went even closer through Gomis who turned and cut in from the right before striking a shot with the outside of his boot off the far post.
Herrera, who had scored in United’s 2-1 defeat at the Liberty Stadium last season, tried his luck from 25 yards as half-time approached, but he dragged it off target. 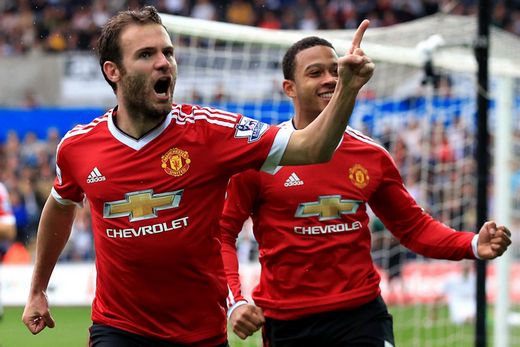 United got off to the best possible start at the beginning of the second period when Mata netted his 50th goal in English football and put the Reds 1-0 up on 49 minutes. It came after another excellent run and cross from Shaw down the left. Rooney let the centre go through to the back post where Mata got in ahead of Williams to smash the ball into the roof of the net.
The Reds almost got a fortuitous second soon after when Memphis’ cross was sliced towards goal by Williams and only a superb fingertip save from Fabianski prevented the goal. The Swans keeper was called up on again on the hour when Herrera slipped a lovely ball in to Mata but his shot was kept out. 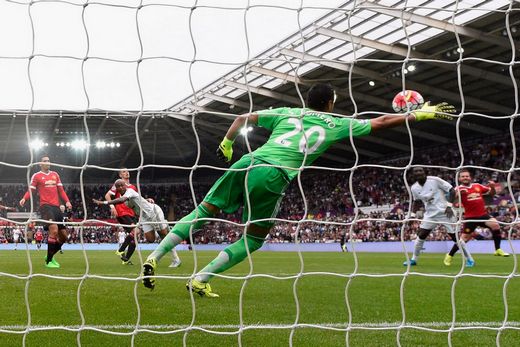 Another United attack was broken up by Williams a minute later as Swansea set off on the break. The ball found its way out to Sigurdsson on the right and his cross was headed home by the unmarked Ayew to level proceedings.
Things got worse for the Reds five minutes later when Gomis put the hosts in front. Ayew turned provider this time as his outside-of-the-foot pass found the Swansea striker who calmly slotted under Romero.

Carrick and Ashley Young replaced Schneiderlin and Mata, before Marouane Fellaini came on for Herrera as the Reds went in search of an equaliser.
United had possession and Young found space for some decent crosses into the box, but the Swansea defence stood firm. With three minutes left, Rooney headed towards goal, but an extra touch allowed Williams to get in and clear the danger.
That proved to be the last opening for the Reds who, once again, left South Wales frustrated and point-less.

"The perfect end to this good run of results would have been a win, but we couldn’t get it and we have to rest, to think about our national teams now and to know that we have to learn our lesson again." - Juan Mata

#MUFC tasted defeat once again at the Liberty Stadium as Swansea City recorded a second successive 2-1 win over the Reds in South Wales.