Manchester United established a three-point lead at the head of the Barclays Premier League table after edging a seven-goal thriller against Reading at Madejski Stadium. 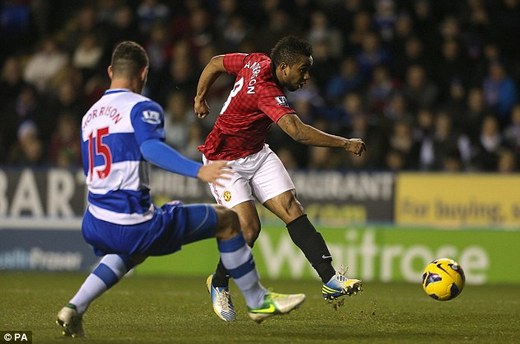 Hal Robson-Kanu lashed home the opener, then Anderson cracked in an equaliser and Wayne Rooney slid home a penalty before Adam Le Fondre and Sean Morrison quickly headed in from corners to have the hosts 3-2 up by 23 minutes.

For all the nightmarish defending on show from the visitors, however, their attacking play was just as irresistible, and Rooney clinically turned in Patrice Evra’s cross to level again, before turning provider for Robin van Persie to spring the hosts’ offside trap and beat Adam Federici.

Van Persie missed two presentable chances to tie up the victory after the break, and instead United had to survive a tense second period which frayed nerves in an altogether more subtle manner than the first.

United were dealt an unexpected boost ahead of kick-off as Manchester City were held to a home draw by Everton, giving the Reds a chance to build a points cushion ahead of next weekend’s Manchester derby at the Etihad Stadium.

Perhaps with one eye on the looming cross-city trip and following midweek toil against Sam Allardyce’s West Ham United, Sir Alex Ferguson made three changes to his starting line-up, with Rio Ferdinand, Darren Fletcher and Ashley Young in for Chris Smalling, Tom Cleverley and Chicharito respectively.

The visitors’ attack looked sharp in their approach play during the opening exchanges, only for the final pass to go awry. There was no such profligacy from the hosts after eight minutes, however. For the tenth time in fifteen Barclays Premier League games, the Reds fell behind when Jonny Evans’ clearing header fell perfectly for Robson-Kanu to take a touch and rifle a finish high into Anders’ Lindegaard’s net.

With United renowned for overturning deficits and Reading known for surrendering leads, both sides’ form hinted at what would subsequently unfold, yet few could have imagined how quickly the game would be turned on its head.

The Royals led for less than five minutes before United drew level in stunning fashion. A sweeping move involving van Persie and Anderson  culminated in Young feeding a pass through for Anderson, and the Brazilian unleashed a stinging effort which flew off the inside of Federici’s post and into the roof of the net.

The visitors’ tails were up, and only a heroic sliding block from Shaun Cummings stopped Young from crossing for Rooney to tap home. From the resultant corner, however, Evans was needlessly barged to the ground by Jay Tabb and referee Mark Halsey had no choice but to award a penalty. 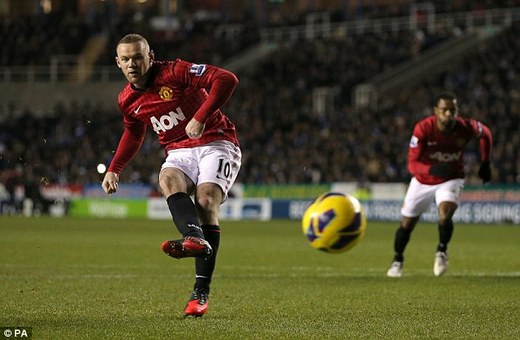 Rooney duly sent Federici the wrong way to put United ahead for the first time, but just when it appeared a familiar script was being penned, the game was once again subverted as Reading struck twice in four minutes amid scenes of ghastly defending from the Reds.

Nicky Shorey’s whipped, in-swinging deliveries provided the problems, dipping into dangerous areas where the Royals had all too easily found space. First, Le Fondre was completely unmarked and nodded between Lindegaard and van Persie, then Morrison escaped Evans to power home a thunderous effort.

United were rocked and looked liable to further concessions with every forward foray from the hosts. Yet, by the time Sir Alex introduced Chris Smalling in place of Rafael, who had been booked for a foul on Jobi McAnuff, the Reds had drawn level once again.

Evra fed Young and raced onto the winger’s neat flick, then slid a superb ball back into the path of the onrushing Rooney for a simple side-footed finish. Three minutes later, the goalscorer turned provider with a beautifully faint flick which released van Persie – played onside by Shorey – for a clinical, right-footed finish past Federici. 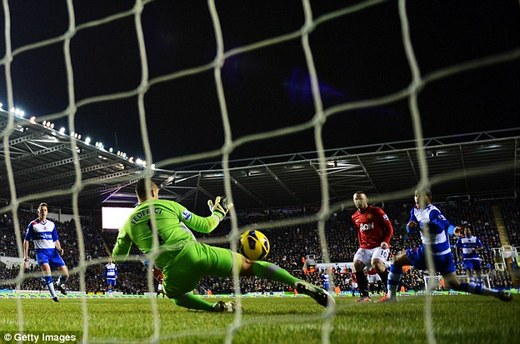 The Dutchman then seemed to have bagged his second goal in the 40th minute, only for his close-range finish to escape the officials’ collective attention. Smalling’s back post header rebounded off Federici’s shoulder and was volleyed goalwards by van Persie. Though Adrian Mariappa was behind the line when he deflected the ball to safety, referee Halsey and his assistants failed to award the goal.

United’s hopes were dealt a setback when Anderson limped from the fray with an apparent hamstring injury, ending an thrilling, yet occasionally horrifying half on a low point and providing further food for thought for Sir Alex and his coaching staff.

Inevitably, both sides began the second half with greater caution, having left themselves so exposed in a maddeningly open first period. It took until the 64th minute for a real opening to present itself, as Evra embarked on another lung-busting run down the left flank and pulled back for Rooney. The striker opted against shooting from a tight angle, instead finding Fletcher, whose misplaced flick to van Persie  heralded the move’s disappointing climax.

Nevertheless, the opening pricked United’s attacking ambitions once more, and within a minute another forward surge, this time from substitute Phil Jones, culminated in van Persie firing over Federici’s near post. The Dutchman then had a glaring opportunity to establish a two-goal lead when he pounced on Federici’s dally, only to blaze wide of an open goal.

That miss left Reading with a glimmer of hope, especially after the haphazard porousness on show in the Reds’ first half defending, but they came no closer to a share of the spoils than when Morrison's downward header was comfortably tipped over by Lindegaard in the first minute of injury-time.

Instead, United’s defensive improvement – with Evans and Ferdinand more imposing and controlled, while Reading’s steady supply of crosses was curtailed – secured a victory which laid bare the good and bad of the Reds’ season to date.