Sunderland have not won at Old Trafford since the final day of the 1967/68 season and, despite creating chances in the second half, they never truly looked like ending that run as United’s first-half purpose and swagger – albeit lacking a ruthlessness in front of goal – ensured all three points for the Reds.

Robin van Persie, Tom Cleverley and Wayne Rooney got United’s goals to maintain a six-point lead at the top of the Barclays Premier League, but the Reds will feel that more should have been made of some excellent goalscoring opportunities, while in the second half David De Gea was the busier of the two goalkeepers. Nevertheless, this remains a positive follow-up to last weekend’s win at Manchester City.

United’s control and attacking intent in the first half was impressive to watch. Michael Carrick was supreme in a first 45 minutes in which he dictated the game’s tempo and orchestrated attacks as team-mates buzzed around in front of him. After he was forced off at half-time, United’s drive noticeably waned.

There were two changes to the team that won at City. Chris Smalling stepped in to partner Rio Ferdinand at centre-back in place of the injured Jonny Evans and ahead of Nemanja Vidic, who took up a place on the bench, while Rafael was given only his second league match off this season. Phil Jones took his spot at right-back.

There’s nothing like a win over your title rivals to inspire confidence in your play and as early as the second minute United were on the front foot. Jones raced onto Antonio Valencia’s pass – a nutmeg through the legs of Jack Colback – but Simon Mignolet was quick off his line to cut out Jones’ sliding cross. Ashley Young then had a shot deflected wide for a corner on six minutes and, after the resulting corner, forced a fingertip save from Mignolet.

Following another corner shortly after that, Patrice Evra found himself unmarked on the penalty spot with the ball at his feet, but he blazed his shot over the bar. With two goals already to his name this season, it may be too much to expect a third. But the inevitable breakthrough came on 16 minutes and was instigated by the guile and persistence of van Persie and Ashley Young. The Dutchman elegantly received a lofted pass on his chest before sweeping the ball out to Young. After one blocked attempt at a cross, Young engineered space with a sharp turn and as Sunderland captain John O’Shea bodged a clearance from the subsequent cross, van Persie took advantage with one touch to control and a second to sweep the ball into the top corner. 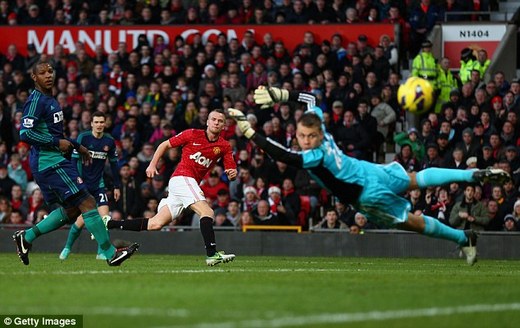 Van Persie almost grabbed a swift second when his header from Jones’ deep cross was turned around the post by Mignolet. United continued to pour forward and within seconds Tom Cleverley doubled the lead with his first league goal at Old Trafford. Receiving the ball wide on the right he slipped a pass inside to Carrick, who played an inch-perfect return ball into the penalty area, which Cleverley met with an arcing  shot past Mignolet into the far corner. Rooney almost added a third, but his volley from van Persie’s headed knock-down went over.

Sunderland’s first-half forays forward were limited purely because United commanded the game so convincingly, as Carrick led possession with his more attacking team-mates swarming forward. Sunderland's best chance of the half came when James McClean dispossessed Ferdinand and attacked the goal from a title angle. However, De Gea made himself big to block the shot.

United were forced into a change at half time as Carrick made way for Paul Scholes, while Sunderland swapped Steven Fletcher for Connor Wickham. It didn’t seem to affect United’s intention to attack as Rooney struck the bar from close range shortly after the restart before Young fired over at the second attempt. But without Carrick's control, Sunderland saw more of the ball and Craig Gardner quickly forced a low save from De Gea, who then had to smother Stephane Sessegnon’s rebound. 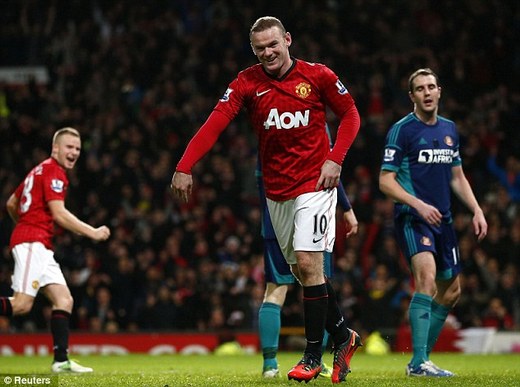 But it was United’s profligacy in front of goal that looked more troublesome. The approach play was undoubtedly good but it was worryingly familiar when Young lobbed a pass over Sunderland’s defence to put van Persie through on goal and the Dutchman’s attempted lobbed drifted wide. That said, just as it appeared Sunderland were growing in confidence, a third goal arrived right on cue. On 59 minutes, Young and van Persie combined as the Dutchman artfully gave Carlos Cueller  and Titus Bramble the slip to cross for a Rooney tap-in at the first post.

Any lingering tension was lifted and Old Trafford found its voice as the Stretford End aired its approval of Vidic warming up on the sidelines, followed by a rousing ovation when he replaced Ferdinand in the 68th minute.

Despite United’s now healthy lead, Sunderland continued to threaten going forward and on 72 minutes got their reward as Sessegnon crossed to the far post for substitute and ex-Red Fraizer Campbell to nod home from close range. De Gea deserves credit for preventing Sunderland from making this a closer contest, but as United head into a busy Christmas period this is another game ticked off with a healthy league lead still intact.