Manchester United went top of the Barclays Premier League after dispatching a stubborn Sunderland outfit by three goals to nil with strikes from Memphis, Wayne Rooney and Juan Mata.
Memphis put United in front deep into first-half injury time following a tricky opening period, before captain Rooney doubled the Reds’ advantage shortly after the break. The hosts then enjoyed a comfortable second half, with Juan Mata wrapping up the result in the 90th minute, as United leapfrogged rivals City to take pole position for the first time under Louis van Gaal.
The boss made five changes to the team that started against Ipswich Town in midweek, with Matteo Darmian, Michael Carrick, Morgan Schneiderlin, Memphis and Anthony Martial all given the nod to start. It was a strong, attacking XI, and the Reds began the game very much on the front foot. 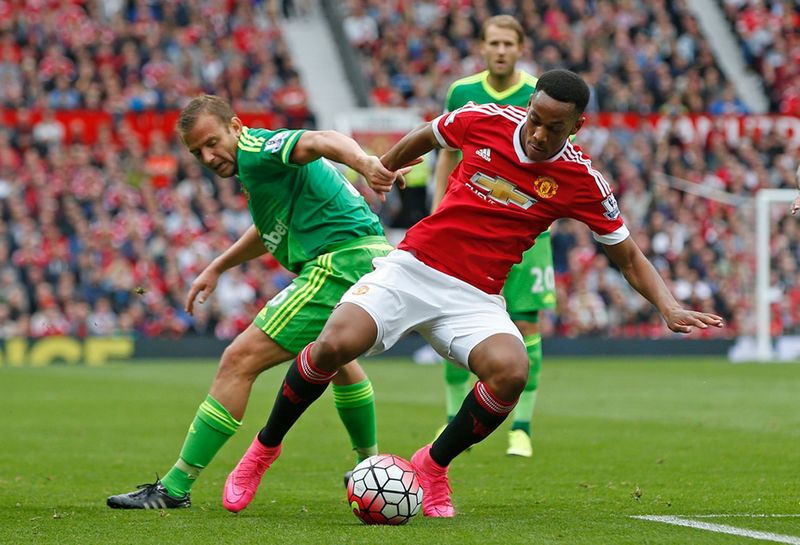 Two of the players reinstated to the line-up - Memphis and Martial - were heavily involved early on, linking up well with Rooney and Mata, the other half of United’s attacking quartet. The fine opening from the home side yielded its first opportunity on six minutes when a Matteo Darmian cross into the box skimmed the head of Anthony Martial, who was on the hunt for his fifth goal in five matches. A further half-chance followed only minutes later, but Memphis could not bring Carrick’s arrowed reverse ball under control.
Sunderland responded well to United’s bright start, as the Black Cats – wearing their bright green away strip – began to assert themselves on the match. Still, a John O’Shea header aside, chances remained at a minimum for the visitors as van Gaal’s men continued to probe for a break through.
The Reds were almost given an enormous helping hand midway through the opening period when a breakdown in communication between Black Cats stopper Costel Pantilimon and defender Younes Kaboul resulted in the giant keeper handling the ball outside of his area having hoofed the ball aloft and away from the prying Martial. A free-kick was awarded just outside the 18-yard box, but Juan Mata could only fire into the wall.
Frustration had begun to seep in around Old Trafford, just as Jermaine Lens caused a fright at the Stretford End as the forward forced David De Gea into a stop with his feet at the near post. A tepid free-kick from Memphis did little to ease the growing sense of tension in the stands, but the no. 7 went on to redeem himself with only seconds remaining of the first half. 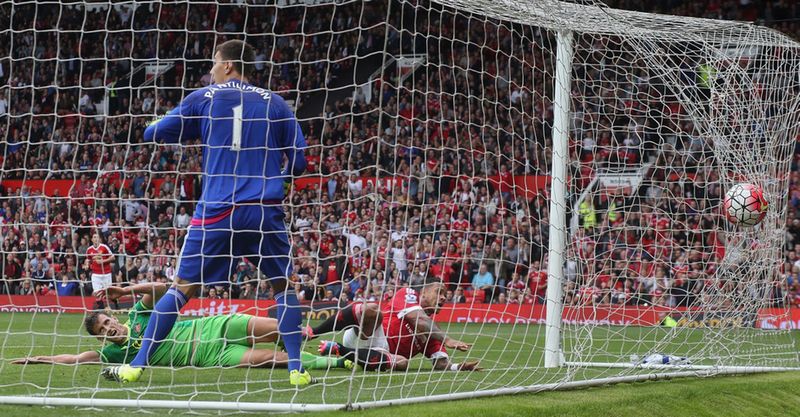 United responded to a colossal roar from the Stretford End to launch one last assault on the Sunderland rearguard, as Blind picked out Mata with a pin-point ball into the box who - in turn - cushioned the ball to the Dutchman to tap home. The noise that greeted his first domestic strike highlighted the importance of the strike, with the Reds now sat in the box seat as they headed to the changing rooms for the interval.

Possession: United 61% Sunderland 39%
Shots at goal: United 6 Sunderland 3
Shots on target: United 3 Sunderland 2
Corners: United 3 Sunderland 0
Sunderland boss Dick Advocaat brought Steven Fletcher on for Adam Johnson at the start of the second half, seemingly with the hope of giving the visitors an improved goal threat. It was United, however, who were again much quicker out of the traps and were rewarded for such tenacity with a second goal only a minute after the restart. 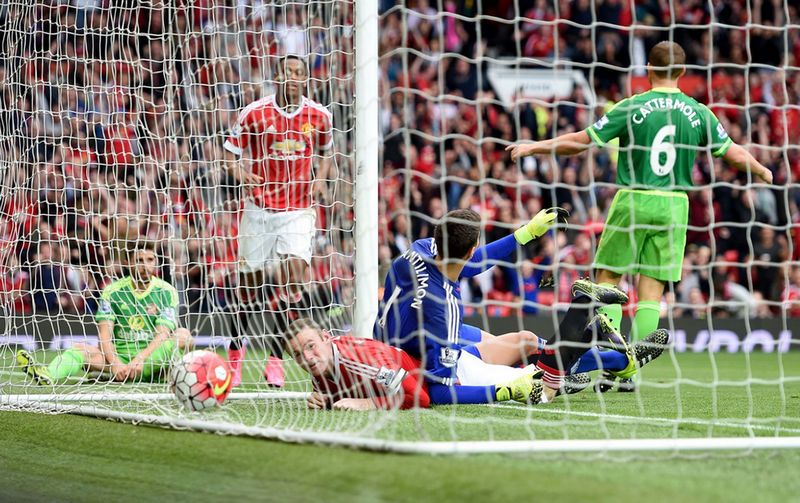 The ever-threatening Martial received the ball from Mata on the right flank, before proceeding to outfox Younes Kaboul, allowing him to fire a pass across goal. The direct cross hit the on-rushing Wayne Rooney, directing the ball – via a slight deflection off Pantilimon – into the back of the net.
Unsurprisingly, the goal prompted a response from Sunderland who began to press United for the first time in the game. The Black Cats won a succession of corners which briefly caused the Reds some hassle, but thankfully were able to clear their lines after a Yann M'Vila free-kick landed dangerously at the far post. Another chance soon followed, but Patrick van Aanholt found De Gea in the way once again after fashioning an opportunity on the left side of United’s area.
Thereafter, it was the home side who were undisputedly in control and should have wrapped up the three points on 67 minutes. The excellent Martial evaded his marker to rush through on goal with only O’Shea and Pantilimon to beat as Memphis sprinted to join him in support. The Frenchman played in his team-mate, but the Dutchman could only aim his shot straight at the keeper.
As the game neared its conclusion, van Gaal replaced Carrick, Blind and Memphis with Schweinsteiger, Jones and Young over a ten-minute period, freshening up his side whilst also guarding against any late Sunderland threat. 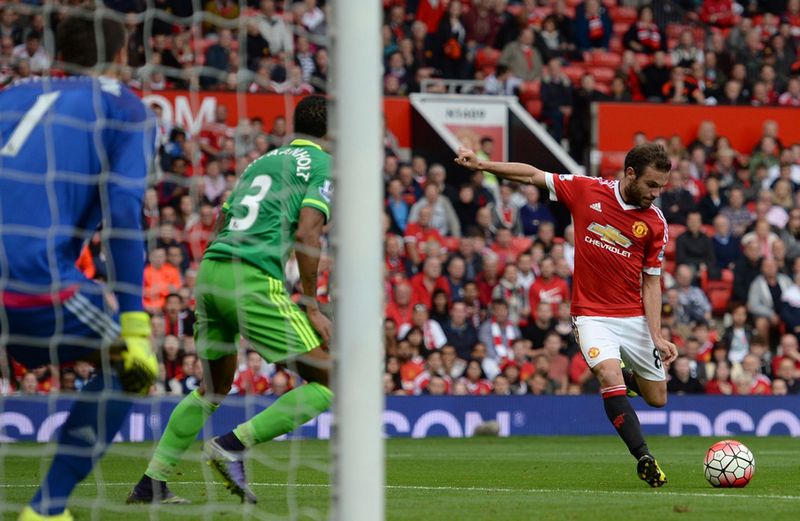 That said, it was United that continued to push and Mata's effort was expertly tipped round the post by Pantilimon. Undeterred, van Gaal’s men continued to throw men forward and Juan eventually got his name on the scoresheet in the 90th minute, firing into the roof of the net from an Ashley Young cross to set the seal on a fine day at the office for the new leaders of the Barclays Premier League.

A typically effective display from Juan Mata earned United’s third goalscorer the Man of the Match award, as voted for by Reds fans on Twitter. The Spaniard received a huge share of the votes (72%), seeing off competition from Chris Smalling and Daley Blind (14% each) who both put in impressive displays at the back.

Louis van Gaal: "Last season at this stage I think we were in 13th position in the league table, so I’m a happy coach. In the second half we controlled the game more than we attacked and I hope that the fans have understanding for that. I was very pleased with the third goal because it was a more accurate reflection of the game."

Wayne Rooney: “The goal before half-time was a massive goal for us, as it gave us a little bit more space in the second half and we played some good stuff and created some chances. In the end it was quite comfortable and a good win.”

Manchester United vs Sunderland ALL GOALS

“I’m a happy coach. I think United can beat every team.” Read more from Louis van Gaal – http://bit.ly/1KWTUc4 – and re-live the Reds’ triumph over Sunderland through our gallery…