Manchester United won a typically competitive clash with old foes Liverpool, courtesy of a goal in each half from Robin van Persie and Nemanja Vidic.

Van Persie's opener arrived in the 19th minute - a fitting minute, some United fans might say - and Vidic claimed the second goal after deflecting Patrice Evra's header home. But Daniel Sturridge soon pulled one back and there were some anxious moments before the end of a tense affair.

Old Trafford's first match of 2013 got off to a quiet start on the pitch despite the wall of noise being generated from the stands. Both teams appeared a little nervous and struggled to make an impact but the Reds gradually began to ask questions of the visiting defence. 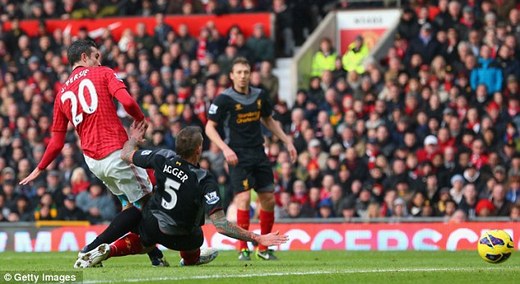 Van Persie had a shot strangled at source by a Steven Gerrard block from a Danny Welbeck lay-off but the Holland international made no mistake when presented with the first real chance nine minutes later. A nice move led to Tom Cleverley switching the ball wide to Evra. The full-back disguised his cross, drilling it straight to van Persie, who swept in the sweetest of finishes.

As his name rang around Old Trafford, it was more evidence that the former Arsenal attacker is the man for the big occasion and it took a sliding challenge from Gerrard to prevent him from going through on goal again after the 'Pool captain initially lost the ball.

Van Persie steered Ashley Young's delicate through ball over the top following an impressive burst forward by Cleverley but Young took a heavy knock soon afterwards following a tangle with Daniel Agger. Then a sloppy pass by Joe Allen allowed Welbeck a great opportunity, but the forward's shot was deflected by the sliding Agger. It did not affect the bubbly Welbeck's confidence as he fired another effort off target from an angle after beating Martin Skrtel.

Liverpool failed to provide much attacking threat in the first half, aside from an ambitious volley by danger-man Luis Suarez that flew well off target, and the lead perhaps should have been doubled before the interval.

Firstly, Cleverley blasted a volley inches the wrong side of Pepe Reina's left-hand post after Young's cross came off Allen's head to create the opening. Secondly, Michael Carrick produced an exquisite pass into the path of Rafael and, despite stumbling, the full-back nudged the ball into the path of van Persie. The leading scorer tried a cheeky back-heel that was blocked by Skrtel before Shinji Kagawa collided with Reina.

The keeper lay prone in his box as the Merseysiders attacked and referee Howard Webb sparked fury from the crowd when he stopped play only when United won possession and looked to take advantage at the other end.

Reina was fine to continue after treatment but Daniel Sturridge replaced Lucas and Antonio Valencia came on for Young in time for the  second half. It became a far more open affair with Welbeck and van Persie having early attempts and Andre Wisdom slipping and miscuing when presented with a decent chance after Suarez dribbled past Evra. 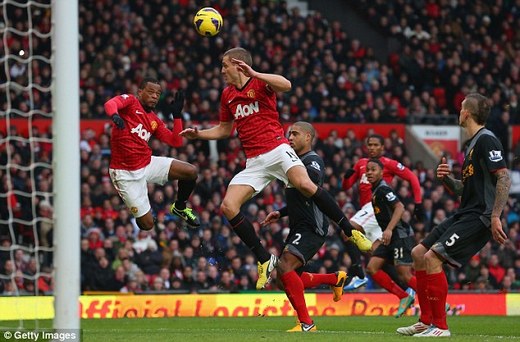 With 54 minutes on the clock, United moved further ahead when Skrtel was fortunate to escape with a booking after flattening Welbeck when he tried to latch onto an Evra pass. The Reds took their own retribution with van Persie's delicious free-kick met by Evra at the far post. The Frenchman's header glanced under Reina via Vidic and it's pretty certain that the skipper will be credited with the goal. 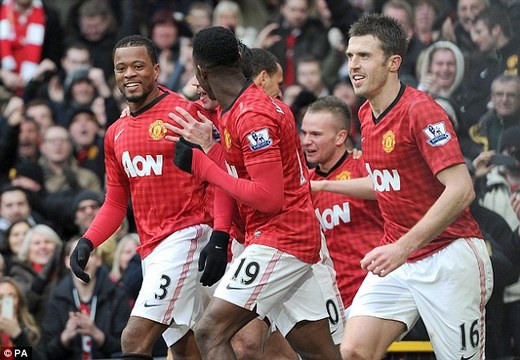 However, any thoughts the points were safe were short lived as, three minutes later, Gerrard won the ball aggressively in midfield and, with Webb playing on, forced a diving save out of David De Gea. Sturridge was first to the rebound to reduce the arrears with a goal on his Barclays Premier League debut for his new club.

The Reds regained some composure and would have netted again but for a fine save by Reina. The Spaniard was clearly showing no ill-effects from his first-half injury as he threw himself to his left to beat away a Kagawa curler after build-up play involving Rafael and Welbeck.

Liverpool remained a threat with Johnson lashing wide and Sturridge also firing off target after taking on Rio Ferdinand when picked out by Suarez's crossfield pass. The next opportunity was all of United's own making, though, as Evra's stray pass was touched by Sturridge to  substitute Fabio Borini who, thankfully, dropped his volley wide.

Sir Alex brought on Phil Jones and Chris Smalling for Kagawa and Vidic as the match entered a nervous finale. With five minutes remaining, Rafael stopped Suarez in his tracks but the ball fell kindly to Sturridge, who lent back and shot into the crowd when an equaliser looked on the cards.

After Johnson survived a second yellow card for a clear foul on Valencia, and Sturridge shot into the side-netting, van Persie's flick from a Valencia centre again brought the best out of Reina. Suarez had one final attempt with a tame header at De Gea but was unable to continue his run of goalscoring form.

The Reds managed to hold out and clinch three welcome points that extended the lead at the top of the Barclays Premier League to 10 points - until, that is, Manchester City's win at Arsenal later in the day.