Manchester United got back to winning ways in the Barclays Premier League with a 2-0 win against West Bromwich Albion at Old Trafford on Saturday.
After long spells of fruitless first-half pressure from the Reds, the breakthrough finally came early in the second period when Jesse Lingard fired home a super finish, bagging his first goal for the club as his star continues to rise. Juan Mata then secured the victory from the spot in injury time as United stayed fourth in the league, notching a sixth clean sheet in seven in the process.
Louis van Gaal named an unchanged side from the XI that had overcome CSKA Moscow in midweek, although Cameron Borthwick-Jackson became the latest youngster to be included in the Dutchman’s 16, following Axel Tuanzebe’s appearance on the bench against Crystal Palace last week. 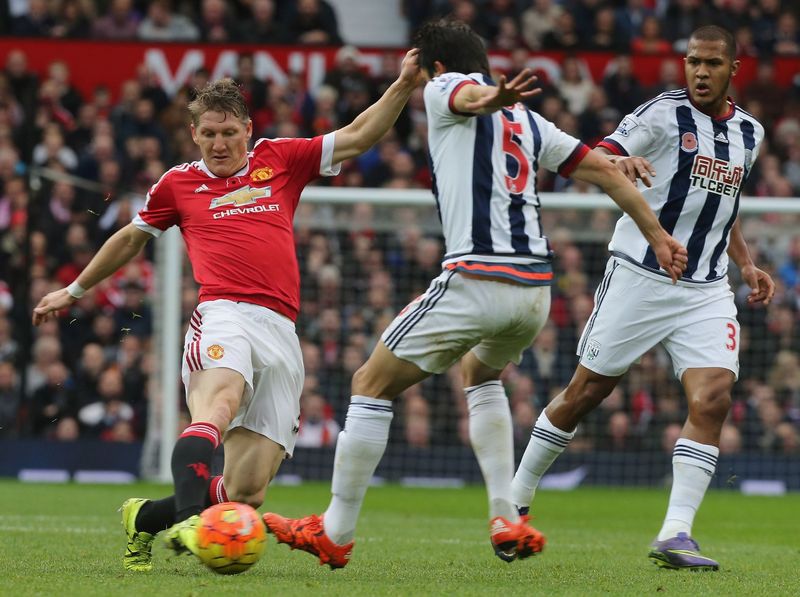 Keen to build on the aforementioned Champions League win, the Reds started brightly and dominated possession, though did little to trouble Boaz Myhill’s goal in the opening 10 minutes. The first chance of note came just after the 15-minute mark, when Bastian Schweinsteiger found Wayne Rooney, who turned well and was able to prod ball into the path of Mata. The Spaniard arced his body to curl a shot past the reaches of Myhill, but also narrowly past the post.
Meanwhile, West Brom, who fielded a side containing Old Trafford old boys Darren Fletcher and Jonny Evans, continued to defend with the tirelessness and commitment that those players had come to embody during their time at United, frustrating the home side for long periods. With the Baggies happy to sit back and soak up the play, the onus was on United to break them down, yet, despite the relentless pressure and possession, few clear-cut chances were created.
Left-sided duo Marcos Rojo and Lingard did provide a bright spark for the Reds, keeping West Brom right-back Craig Dawson on his toes, and it was the latter of the United pair who was next to go close. 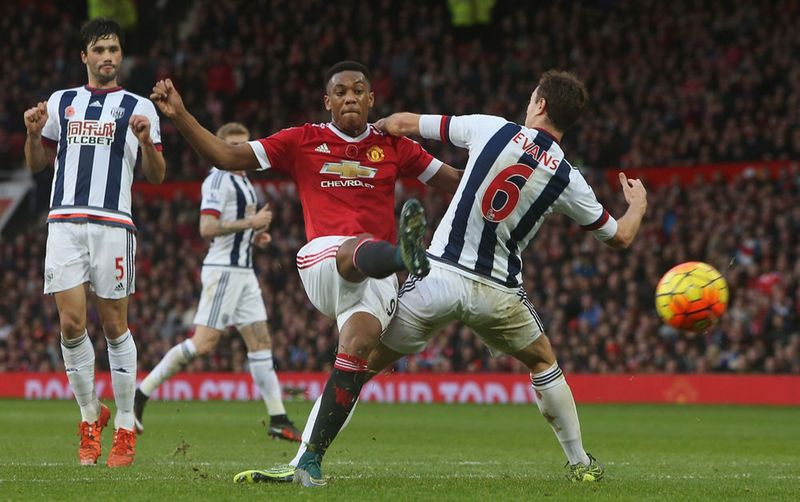 Mata collected the ball on the edge of the area before arrowing an expertly-weighted ball to the far post looking for the young winger, but just as it seemed destined to provide Jesse with the chance of the half, Dawson intervened with a perfectly-timed header to clear the danger. Lingard enjoyed another opportunity late in the half, having been put through on goal by Anthony Martial, but Evans stood firm, diverting the ball out of play.
Seemingly not content with creating chances, Martial then tested Myhill himself, but his stinging drive was thwarted by the stopper as the score remained goalless at the interval.

Possession: United 76% West Brom 24%
Shots at goal: United 7 West Brom 2
Shots on target: United 1 West Brom 0
Corners: United 2 West Brom 1
There were no changes to personnel from either side at the break and nor was there a change to the state of play, as United began to take the game to the visitors from the get-go.
Buoyed by chants of ‘Attack, Attack, Attack’, it wasn’t long before the Reds finally turned possession into a tangible advantage and, unsurprisingly, it was the excellent Lingard who broke the deadlock. 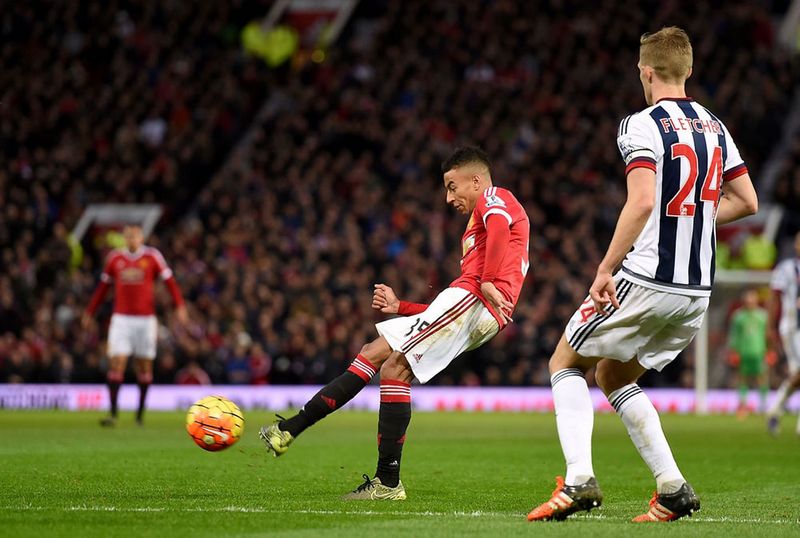 With just over 50 minutes on the clock, Martial sent a ball into the area looking for Rooney, only for Chris Brunt to clear the danger. Thankfully, the Ulsterman’s clearance only went as far as Lingard, who took a touch before bending a superb effort past the beaten Myhill. The Warrington-born winger’s first goal for the club was one that belied his young years and was greeted by a deafening roar from the Stretford End, stirred from its first-half slumber.
The goal gave everyone of United persuasion a real lift going into the start of an important second half, but chances were still at a minimum, despite the home side’s continued forays forward.
As the half drew on it was West Brom who began to show more ambition going forward and Evans might well have drawn the visitors level as he seized upon confusion in the United defensive ranks, possibly caused by a double substitution for the Baggies shortly before a free-kick. It was a let-off for van Gaal’s men, who then received another huge slice of luck two minutes later when substitute Saidy Berahino headed over from point-blank range.
Borthwick-Jackson and Ander Herrera were then brought on in quick succession in place of Rojo and Rooney, following the earlier introduction of Phil Jones at right-back. The changes seemed to take the sting out of the game, with United now back in control, and the home side earned the chance to seal the points in added-on time. 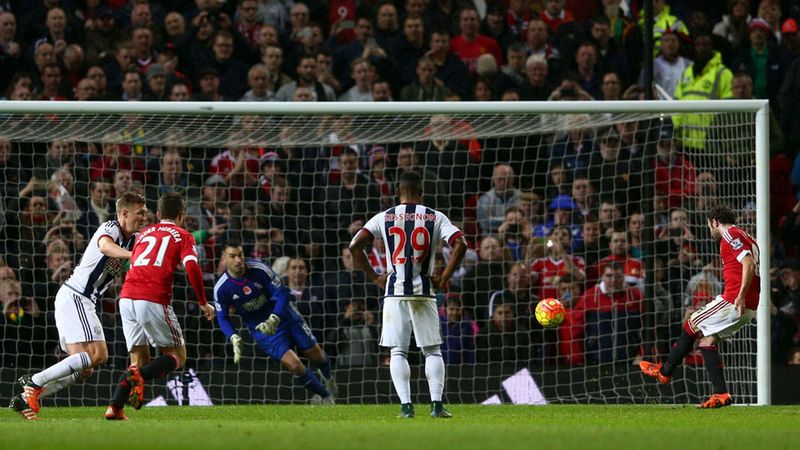 The ever-sprightly Martial seized upon the tired legs among the Baggies defence and looked set to fire home before being chopped down by Gareth McAuley. The West Brom man saw red for the late challenge, allowing  Mata to step up and coolly slot home from 12 yards – job done.

Another fine display from Jesse Lingard, this time capped with a goal, caught the eye of Reds fans on Twitter, who voted the Englishman Man of the Match. The tricky forward scooped 63 per cent of the votes in the poll on @ManUtd, with Bastian Schweinsteiger (26 per cent) and Chris Smalling (11 per cent) also commended following fine performances.

Louis van Gaal: "Goals are always the most important thing in a game but we're still not giving many chances away. We have won a difficult game that we lost last year and have improved again."

Daley Blind: "A lot of teams come here to get a point so we have to be patient and move the ball quickly. Sometimes it takes a while before you get a chance, but in the end we got the three points and that’s the most important thing."

#MUFC got back to winning ways in the Barclays Premier League with a 2-0 win against West Bromwich Albion at Old...

Posted by RyanGiggs.cc on Saturday, November 7, 2015