United may have lost this bout between Manchester’s heavyweights - but with a 12-point advantage and just seven games remaining, the Reds still remain on track to win the battle overall and reclaim the title from City.

That's the overriding positive after goals from James Milner and Sergio Aguero, before and after a Vincent Kompany own goal, gave victory on the night to the Blues.

The matchday programme billed it as a ‘Game of Thrones’ – last season’s champions against this year’s most convincing pursuant of the title - and yet on the night no team would be de-throned, no crown bestowed upon this season’s champions. Not yet. That said, even with a robust 15-point advantage going into this fixture allowing room to manoeuvre, this was a match United desperately wanted to win as an assertion of dominance. The Reds will have to ensure the league table, a much better barometer, does that come the end of the season.

Neither Nemanja Vidic nor Jonny Evans, both nursing niggles, were included in Sir Alex’s starting eleven or named among the substitutes, and so Rio Ferdinand and Phil Jones were paired in central defence for the first time since January 2012 against Newcastle, a game United lost 3-0. But leading up to the derby Sir Alex extolled his faith in the qualities of young defender Jones, who has excelled this season and is destined to take up a role in the heart of the back  four. He certainly didn't let anyone down and had a heavy hand in forcing Kompany to turn the ball into his own net.

In front of the defence, Michael Carrick and Ryan Giggs, who started his 37th Manchester derby, were the deep-lying midfielders, while Ashley Young, Danny Welbeck, Wayne Rooney and Robin van Persie completed an attacking side. City named Aguero on their bench, leaving Carlos Tevez to lead the line alone in front of a packed midfield.

There was little sign of congestion in the middle of the park as the match got off to a fast-paced, evenly-matched start, with both teams playing on the front foot and referee Mike Dean letting some stern challenges go without stopping play. Welbeck had a glancing header saved easily by Joe Hart, while James Milner’s fiercely-struck cross was palmed to safety by David De Gea, and then van Persie stroked an effort wide of the post, all inside the opening ten minutes.

City took the initiative after that, however, and a spell of pressure led to a good opening after 20 minutes when Silva’s neat lay-off from Kompany’s lofted pass was superbly anticipated by Jones, who slid in to clear the ball from Tevez’s toes.

Outright chances were few and far between in the opening 45 minutes as the game failed to deliver on a blustering opening period. United gradually edged back into the contest and with seconds left on the clock before the break Rafael poked a shot against the bar from van  Persie’s lay-off inside the area. 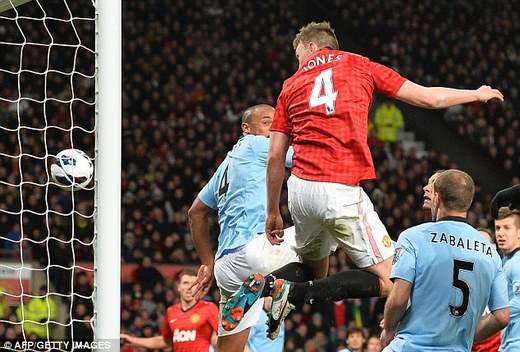 The second half began in much the same fashion as the first: an open affair, with neither side dominating, but out of very little City struck the game’s first blow on 51 minutes as Milner’s shot from 20 yards fizzed through sliding challenges from Jones and Carrick and proved too powerful for De Gea’s outstretched right hand. United had conceded possession easily in the lead up to the goal as Giggs’ attempted backheel allowed Barry to attack down the left.

United’s players looked despondent walking back to the centre circle but within eight minutes the Reds had levelled and the game’s complexion appeared to alter. Referee Dean awarded a free-kick on the right flank for Yaya Toure’s challenge on Rafael and van Persie’s incisive, inviting centre was bundled over the line as Jones challenged Kompany in the air. Jones, inexplicably given his undoubted potential, is the butt of City fans’ transfer triumphalism and his celebrations – and performance in general – hinted at someone who feels he has a point to prove. He doesn't, but his display was noteworthy even if the goal is certain to be marked down as Kompany's. 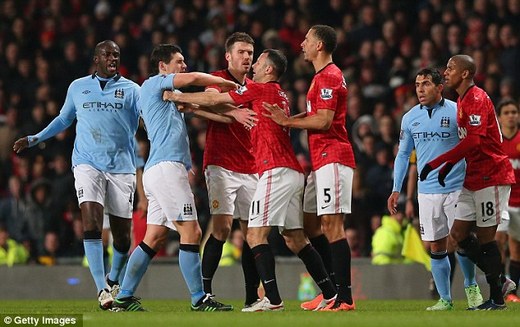 The goal lifted the Old Trafford crowd and inspired a confident, more positive approach from Sir Alex’s team, but just as United seemed to be taking assertive control of the match, City struck again on 78 minutes when substitute Aguero evaded four red shirts and beat De Gea at his near post with a shot high into the roof of the net.

United could not conjure a response as had been the case after City first found the net, and even now with a 12-point advantage over the Blues there is still hard work to be done to deliver title number 20. However, this setback - a first league defeat since November - should galvanise the Reds to strive to finish the job.