Manchester United lost back-to-back games for the first time under Louis van Gaal on Sunday as Everton secured a 3-0 win at Goodison Park after goals from James McCarthy, John Stones and Kevin Mirallas.
The defeat leaves the Reds fourth in the Barclays Premier League table with four games left to play and seven points ahead of fifth-placed Liverpool, who drew 0-0 with West Bromwich Albion on Saturday but still have a game in hand to play following their involvement in the FA Cup semi-finals.
The afternoon began with a minute’s silence that honoured former Everton chairman Sir Philip Carter and the 30th anniversary of the Bradford fire disaster. Although such occasions can affect the tempo of the game, this match began at a high pace. 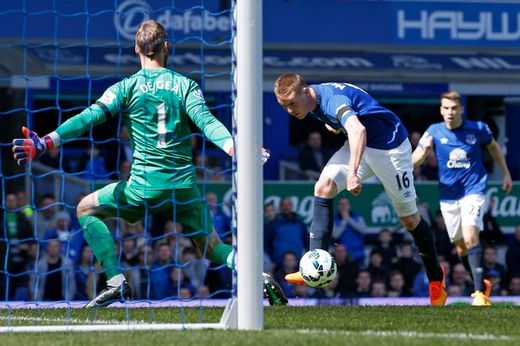 Everton scored in just the fifth minute with a powerful counter attack that began with Gareth Barry clearing a United corner. The ball was scrambled forward and Seamus Coleman played it inside to James McCarthy, who scurried past challenges from Paddy McNair and Daley Blind to calmly finish past David De Gea.
Marouane Fellaini spurned an excellent chance to level moments later by blazing over from 15 yards after pouncing on a loose ball. The Belgian, making his first appearance at Goodison with United, was then booked following fouls on Coleman and Ross Barkley.
United’s pressing caused Everton problems, however, and the Reds controlled the opening 30 minutes. Blind, who was recalled to the starting XI in place of Radamel Falcao, forced a decent save from Tim Howard early on before the former Reds goalkeeper produced another comfortable stop to deny Chris Smalling’s header. 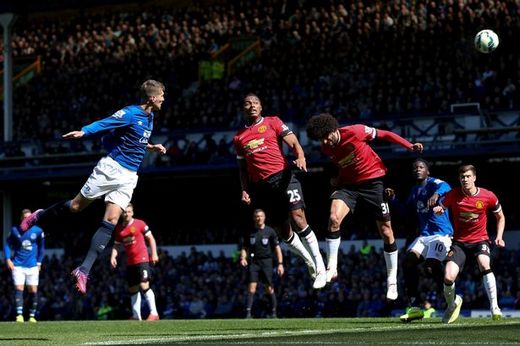 Romelu Lukaku's speculative effort on 28 minutes made easy work for De Gea, but United's no.1 was soon picking the ball out of his net after John Stones rose to powerfully head Leighton Baines’ corner home. It was the defender’s first goal of the season and one that left United with work to do after the break.
Van Gaal intervened at half-time by replacing Fellaini with Falcao and United went close to scoring immediately when Rooney’s close-range shot was brilliantly saved by Howard. Juan Mata also saw an effort blocked following an excellent overlapping run and pass from Luke Shaw, though the second half was largely uneventful up until the hour mark.
Angel Di Maria replaced the unusually quiet Mata on 63 minutes and Everton forged a decent chance soon after when Barkley hit a 20-yard shot at goal. Shaw was then booked for a foul on Aaron Lennon as United’s frustrations began to show.
Di Maria hit a terrific forward pass on 69 minutes that was met by Falcao, who arced his body into a position which enabled him to head a lofted effort that was well saved by Howard. Rooney then hit a 25-yard shot that was blocked by a brave Everton defence that was impressive in its acts of heroism. 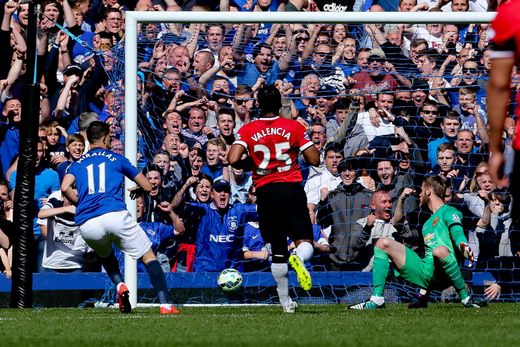 Kevin Mirallas replaced Leon Osman for Everton and scored a decisive goal on 74 minutes in questionable circumstances, having latched onto a long ball that was originally aimed at an offside Lukaku, but he finished past De Gea as the United defence waited for the linesman’s flag to rise. The Belgian international notably scored in this same fixture last season.
Falcao seemingly scored with an impressive finish on 82 minutes but the Colombian was offside. Rooney then picked up a late injury and was replaced by Robin van Persie, though the Dutchman could do nothing to prevent a painful defeat at Goodison Park. 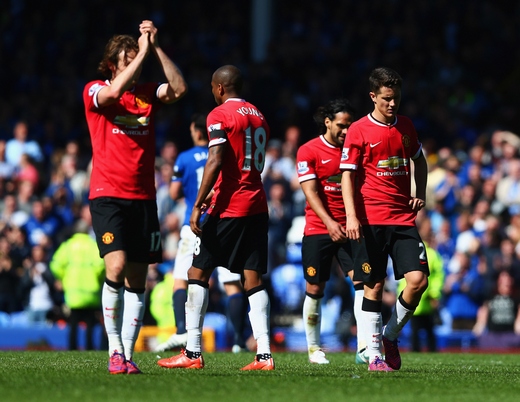 Having produced one of the performances of the season in last month's 2-1 win at Liverpool, #MUFC returned to Merseyside...