Manchester United bounced back from three consecutive defeats as goals from Juan Mata and Marouane Fellaini secured a hard-fought victory over Crystal Palace at Selhurst Park, boosting the club's chances of securing Champions League qualification.
The Reds were made to work hard for the three points, however, after Jason Puncheon scored a deflected equaliser at the start of the second half for the hosts. Thankfully, Louis van Gaal’s men held their nerve and secured an important win that puts pressure on fifth-placed Liverpool ahead of their trip to Chelsea at Stamford Bridge on Sunday.
Van Gaal made two changes to his starting XI by bringing in Phil Jones and Luke Shaw for Paddy McNair and Robin van Persie. The latter was not even in the squad due to a virus, while Angel Di Maria also missed the game due to injury.
Daley Blind went agonisingly close in the seventh minute when receiving the ball in acres of space, before hitting a low 25-yard shot that was palmed onto the left-hand post by Julian Speroni. Ander Herrera also saw another long-range effort fly just wide of the goal during a confident opening. Wilfried Zaha, facing United for the first time since leaving in January, skinned Antonio Valencia in the 16th minute before executing a fine cross that just evaded Glenn Murray. The deadlock was broken seconds later, however, and at the other end of the pitch. 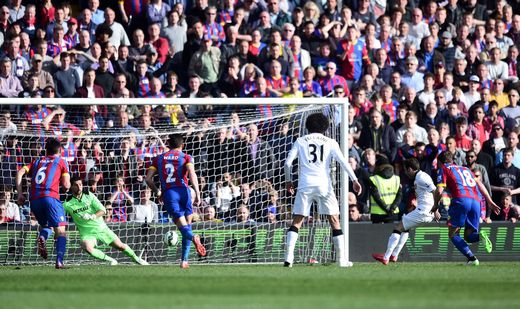 Ashley Young’s cross from the left wing struck the hand of Scott Dann and referee Michael Oliver instantly pointed to the penalty spot. Mata stepped up to take it and the Spaniard calmly slotted the ball into the bottom left-hand corner to score his 10th goal of the season.
Herrera shot wide upon the restart and Palace almost levelled soon after when captain Mile Jedinak headed wide. The Eagles then unsuccessfully appealed for a penalty, or at least their fans did, when Fellaini appeared to shove Joel Ward.
Shaw went to ground and looked extremely groggy when receiving treatment, before exiting the action for Jonny Evans on 38 minutes. The Northern Irishman slotted in at centre-half as Phil Jones moved out to left-back at the end of the first period. 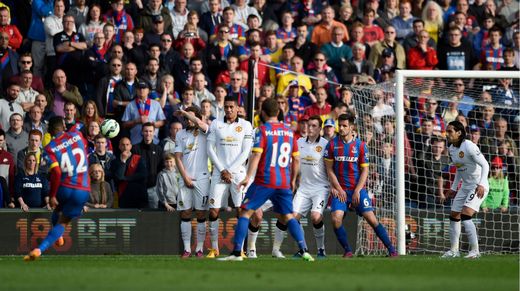 The second half began without Rooney, who received two separate kicks to his left thigh during the opening 45 minutes and was replaced by Radamel Falcao. Alan Pardew also made a change by introducing Puncheon for Joe Ledley in midfield, and the decision quickly paid dividends when the substitute scored with a slightly deflected free-kick off Blind's head on 56 minutes.
United looked rattled while under pressure as the momentum swung in favour of the Eagles. James McArthur could have doubled his side’s advantage just before the hour when shooting narrowly wide of goal. Van Gaal’s men forged a decent chance on 66 minutes when Fellaini headed tamely at Speroni, although Murray should have put Palace ahead when his close-range effort was miraculously saved by De Gea. 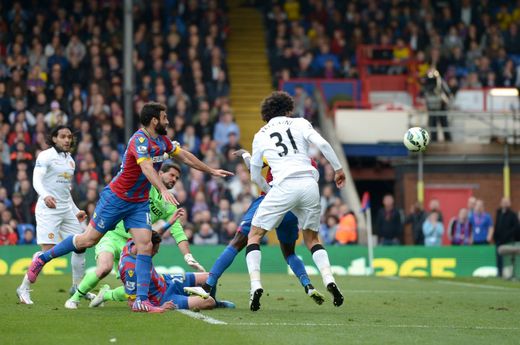 Young's low shot was deflected just wide on 74 minutes, before the tenacious winger saw another attempt blocked from the resulting corner. His superb run and centre then led to Mata shooting over from close-range, before the lead was restored on 77 minutes when another Young cross evaded Speroni and was nodded home by Fellaini. Although De Gea was forced to save another strike from Murray in the closing stages, United held on to secure a priceless victory with Herrera unlucky not to add a late third. 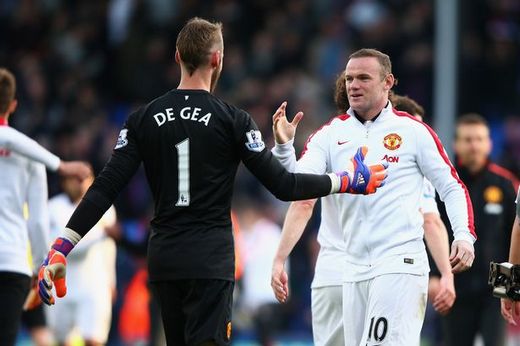 Juan Mata and Marouane Fellaini were both on the mark as #MUFC secured a vital win at Selhurst Park on Saturday...