Manchester United once again had to come from behind but showed incredible spirit to win 3-2 at Aston Villa with Javier Hernandez as the hero.

Andreas Weimann struck either side of half time to hand Paul Lambert's team a shock two-goal advantage but Hernandez was introduced at the break to score a brace himself and force the equaliser off Ron Vlaar. Robin van Persie twice hit the bar in a matter of seconds, leaving it to Chicharito to earn the plaudits by heading in the ex-Arsenal star's late free-kick.

Chris Smalling started his second successive match after returning from injury due to Jonny Evans' absence and Paul Scholes was asked to dictate the play in midfield. Yet the Reds appeared laboured from the outset in low-key first period, only enlivened by Weimann's strike at the end of the half.

Although Michael Carrick had a header from a van Persie corner comfortably clutched by Brad Guzan early on, the American keeper was not required to make another save until easily handling Wayne Rooney's ambitious long-range shot in the 44th minute.

Ashley Young, jeered on his old stamping ground, collected a Scholes pass to bend a shot wide but he had to make an important block at the other end when Christian Benteke shaped for a volley inside the box. Villa enjoyed some dangerous moments with Weimann wasting a three-on-two break and Rio Ferdinand having to clear when Benteke sprung the offside trap.

With Patrice Evra and Smalling needing treatment at various stages, it was a rough ride in defence and Gabriel Agbonlahor did not make the most of a Stephen Ireland pass, even if Smalling did miskick a poorly-placed cross. Referee Kevin Friend whistled when Ireland robbed Scholes to set up Benteke, one of a string of fouls on the midfield veteran, but it failed to provide a wake-up call.

United lacked urgency and found Vlaar in commanding form at the heart of the home defence, even if Sir Alex's side were dominating possession. Ireland clipped a left-foot shot wide with Villa's first real attempt of the game before a bolt out of the blue in first-half stoppage time. With some supporters expecting play to be called to a halt when two Villa players collided, both teams instead continued and Benteke tore down the left, shoving Smalling to the ground in the process.

Referee Friend saw nothing untoward in the muscular challenge and the striker shrewdly picked out Weimann, who side-footed a rocket of a finish past David De Gea to hand the Midlanders a surprise lead. Although the Reds certainly did not deserve to be ahead at the interval, it's fair to say falling behind had rarely looked on the cards.

Clearly unhappy with events, Sir Alex withdrew Young and replaced him with Hernandez but Villa went further ahead in the 50th minute. Scholes' stray pass allowed the hosts to break and Benteke's dummy saw Ireland switch the ball to Agbonlahor. The speedy forward made the most of the space afforded to him on the left to cross for Weimann to thunder in from close range.

United looked to be on the ropes but Hernandez showed his nose for goal to reduce the deficit eight minutes later. The in-form Mexican made the most of Scholes' delightful ball over the top to clip under Guzan for his seventh strike of the season. 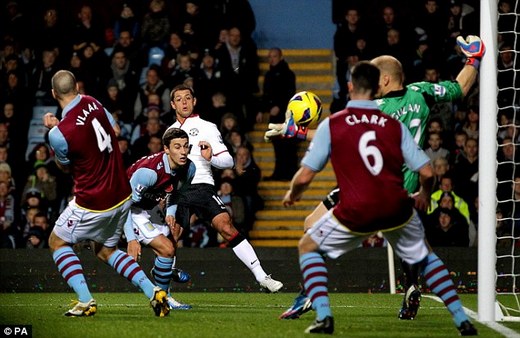 Five minutes later, it looked as though Chicharito had swiftly extended his tally to eight but instead the equaliser was credited as a Vlaar own goal. Rooney beautifully picked out the run of Rafael and, when Hernandez met the Brazilian's cross at the far post, the ball cannoned into the net off the Dutch defender.

Playing with the purpose of a team at the top of the table, the visitors almost went ahead but Guzan dived to palm away a Rooney attempt while Villa showed they were still very much in the mix with Weimann only denied a hat-trick by a superb stop from De Gea following a Barry Bannan centre.

After Tom Cleverley was introduced at the expense of Scholes, the Reds came agonisingly close to going ahead with van Persie hitting the bar twice inside 47 seconds. The Dutchman smashed a header against the woodwork from a Rooney corner and then produced a wonderful attempt that curled past Guzan but again failed to provide a third goal.

Rooney blasted off target as United entered the closing stages without the England international, who hobbled off to be replaced by Anderson.  As Rafael lashed over the bar from long range, the Reds looked like being frustrated in an attempt to find a winner with Lambert making three separate substitutions to help run down the clock. 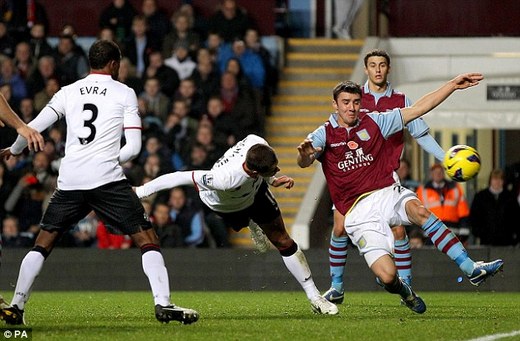 However, yet again Sir Alex's side completed a trademark comeback courtesy of Hernandez, who dived to nod van Persie's free-kick past Guzan after Anderson was fouled in midfield. This was classic United and puts pressure on the title rivals heading into Sunday's fixtures by extending the lead at the top of the table to four points. Chicharito grabbed the match-ball at the end but seems unlikely to be credited with all three goals despite his super-human efforts to turn things around.