The Reds signed off from the first leg of Tour 2013 presented by Aon with a highly entertaining 5-2 victory over Kitchee at the Hong Kong Stadium on Monday.
In front of a sell-out crowd, goals from Danny Welbeck, Chris Smalling, Fabio and substitutes Adnan Januzaj and Jesse Lingard sealed the win, although the Reds were well tested by the Hong Kong side, particularly after the break.
The pitch had taken something of a beating in the days leading up to the game following a prolonged period of torrential rain in the city and the staging of four Barclays Asia Trophy matches involving Sunderland, Manchester City, Tottenham and South China. Much of the centre of the pitch was covered in sand, while both goal-mouths began cutting up from the first minute.
For his final line-up on this leg of the tour, David Moyes opted to pair Chris Smalling and Michael Keane in the centre of defence, with Fabio and Patrice Evra on either flank. In front of them lay a three-man midfield of Tom Cleverley, Anderson and Michael Carrick with Wilfried Zaha and Ashley Young supporting lone-striker Danny Welbeck on each wing. 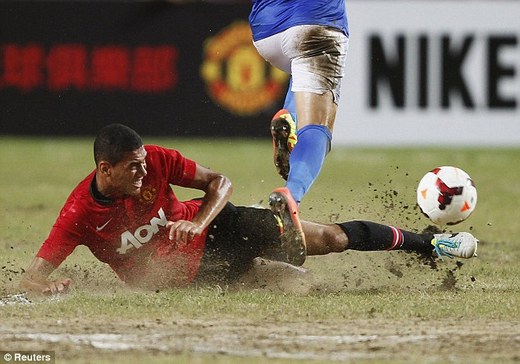 Much of United’s early penetration came down the right where the lively Zaha once again impressed. It took the Reds until the 15th-minute to carve out the first real sight of goal with Anderson striking a 20-yard effort just wide, but 60 seconds later David Moyes’ side were ahead. Carrick’s lovely pass over the top found Young down the left and after the winger’s deflected effort had crashed against the goalkeeper’s right-hand post, Welbeck was on hand to lash the rebound home from close-range.
Zaha should have doubled the advantage three minutes later when he was found by Welbeck’s pin-point right-wing cross. But after doing the hard work of bringing the ball down and turning the defender, the 20-year-old blasted over from eight yards.
A frantic few minutes followed thereafter with Kitchee’s Juan Belencoso firing over the bar at the other end and Young, after being picked out by Evra, seeing his close-range effort blocked when a goal looked the only outcome. A second strike for United did indeed follow a minute later.
After a United corner had initially been cleared, Young found Cleverley on the right and his whipped cross was met by Smalling who hung brilliantly in the air and guided a header past Wang in the Kitchee goal despite the keeper getting a hand to it.
On 26 minutes the Reds made it three with a goal of the highest quality. And Zaha was involved once more. After receiving the ball on the right, the winger flicked a sublime pass with the outside of his right boot into the box to the onrushing Fabio who followed suit with an identical finish past Wang.
Welbeck and Smalling went close to a second apiece on the half hour-mark, but it remained 3-0 up until the break. 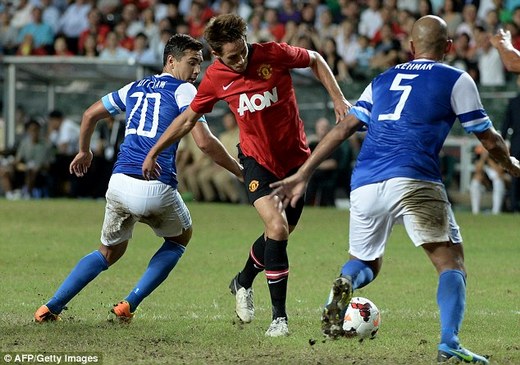 Moyes made three changes at the start of the second period with Alexander Büttner, Jesse Lingard and Adnan Januzaj replacing Evra, Young and Welbeck respectively.
Having caught the eye already during pre-season, Januzaj took just five minutes to do so again, this time with his first ever senior goal. Büttner scampered down the left before chipping the ball up to Januzaj who expertly directed a header past Wang.
Kitchee didn’t let the early second-half setback derail them and they got themselves on the scoresheet on 58 minutes thanks to a sublime strike by Lam. Having collected possession in United’s half he twisted and turned before letting fly with a 20-yard belter into the top corner past the helpless Ben Amos.
Januzaj twice went close to netting his second of the game with two efforts well saved by Wang. Kitchee, meanwhile, buoyed by Lam’s upped the tempo in attack and on 68 minutes United’s earlier four-goal lead was halved thanks to Alex Alkande’s superb run and finish.
The quality goals kept on coming with Lingard cementing his place as the team’s top scorer for this leg of the tour 10 minutes from time with a superb curling effort from the edge of the area.
It was the perfect way to sign off United’s stay in Asia and gives manager David Moyes yet more food for thought as the start of the season edges ever closer.