United are through to the Champions League quarter-finals thanks to a close-range couple from Javier Hernandez - but it was a far from comfortable night for the Reds after conceding a late away goal at Old Trafford.

Wes Brown's unfortunate own goal created an anxious last eight minutes but Sir Alex Ferguson's men held out to win 2-1 and book a place in the last-eight draw alongside the likes of Barcelona and Tottenham Hotspur.

Sir Alex Ferguson’s pre-match promise to go for it was reflected in his line-up as Nani and Ryan Giggs returned to the flanks and Paul Scholes was restored in the centre. The bench also had a strong emphasis on attack with the marauding midfield stars of Saturday’s FA Cup win over Arsenal, Rafael and Fabio, plus Antonio Valencia and Dimitar Berbatov among the seven subs. The defence, however, was not the expected quartet with a calf problem forcing Nemanja Vidic to join Rio Ferdinand on the sidelines.

Marseille, meanwhile, had top scorer Andre-Pierre Gignac back – he missed the first leg in France. Ex-United defender Gabriel Heinze started for the visitors in central defence, perhaps a safer haven than at left-back where Nani stretched him a fortnight ago.

The Reds engineered the perfect start from the opposite wing – United’s left. Rooney fed Ryan Giggs, scurried forward to collect the return pass and then drilled a low ball into the six-yard box for Hernandez to gleefully tap home. Marseille’s stunned defenders appealed in vain for offside as the Reds raced away to celebrate the Mexican’s 15th goal for the club, his first in Europe since the winner in Valencia in late September.

Gignac had a golden opportunity to equalise three minutes later when a flick over the top found him in the area behind Smalling and Brown; fortunately Marseille’s number 10 rushed his big moment and missed the target comfortably. Smalling was sharper when Gignac next ventured into his territory, showing great body strength to shield and keep the ball much to the Frenchman’s frustration. 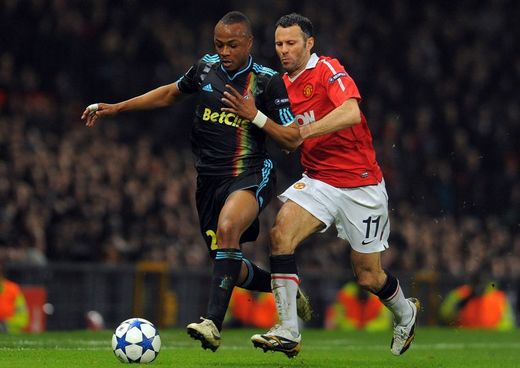 The duel between Hernandez and Heinze had top billing in the early part of the match, however. The United striker clattered into his opponent for the game’s first yellow card and was then sent sprawling by a retaliatory challenge moments later. The Argentine centre-back escaped a caution for his foul, but he was almost punished for his defending again; instead Hernandez headed Rooney’s lofted pass into the hands of Steve Mandanda. When the keeper’s poor clearance, straight to Nani, gave United another sniff at goal, Rooney spurned the chance to shoot and Marseille escaped.

Although there were one or two other half-chances for Nani and Rooney, the threat of a game-changing away goal began to increase as the score remained 1-0 and the half wore on. Lucho Gonzalez blazed a free-kick over from close to the byline, Souleymane Diawara despatched a free header into the Stretford End, Loic Remy thundered a volley wide and Benoit Cheyrou had a long-range shot easily saved by Edwin van der Sar. All warning signs will have been duly noted by Sir Alex as he followed his troops into the dressing room, no doubt to stress the need for a second Reds strike.

Marseille's inaccuracy in front of goal had given van der Sar only light duties in the first half but he was the first keeper called into action after the break, diving bravely at the feet of Gignac to claim a dangerous ball. The Dutchman took a knock to the head in the process and fleetingly there were fears of a second enforced substitution - John O'Shea had strained a hamstring ten minutes before the interval to be replaced by Rafael. Fortunately van der Sar was fine and the home faithful breathed easy.

Relief was also the overriding feeling when Loic Remy blasted the ball across the area after weaving his way into the area, and later when Brown clumsily missed Taiwo's cross from the left. More like light relief when Heinze got his header horribly wrong from a corner and the United fans responded with a taunt recalling his infamous attempt to sign for Liverpool.

United's defensive ranks were depleted again when Rafael was carried off, seemingly with another hamstring problem; his brother Fabio was the ultimate 'like-for-like' replacement. A more positive substitution was the earlier introduction of Antonio Valencia. On for Nani, the Ecuadorian attacked Taiwo with great relish and the Reds were soon rewarded when his pass was forwarded on by Giggs and Hernandez bagged his and United's second goal with another simple finish.

Marseille had good chances before the Mexican made it 2-0 - the pick being Cheyrou's low shot, saved by van der Sar, after all-too-easy approach play with Remy on the right wing. More power from the Marseille midfielder and the away goal would have been chalked up at 1-1. Instead it came at 2-1 - Brown's header inadvertently beating his own goalkeeper, despite Scholes' effort to clear from behind the line.

The own goal set up an anxious finish, with memories of Porto's late draw in 2004 perhaps preying on some Mancunian minds. Thankfully there would be no sting in the tail and the Reds are through to keep another Wembley dream well and truly alive.

Edwin van der Sar – After Saturday’s spectacular, this was a more solid display as he made straightforward – yet still important – saves from Benoit Cheyrou in particular

John O’Shea – Robust at right-back, he was beginning to add an attacking threat when he was unfortunately injured; on pulling the ball back, he also pulled a hamstring

Wes Brown – Had a testing time against Marseille’s aerial power, never more so than when former team-mate Gabriel Heinze pressured him into scoring the own goal

Chris Smalling – Seemed to have the better of Gignac who was later withdrawn, but was fortunate when his failed clearance was volleyed wide by dangerman Loic Remy

Patrice Evra – Skipper for the night was kept reasonably occupied by Remy and co; enjoyed the last laugh after being booed by the Marseille crowd in the first leg

Nani – Made a bright start, linking up well with Rooney and Hernandez in the first half; understandably faded in the second period on his earlier-than-expected return

Michael Carrick – Put in a good shift in the engine room, helping the Reds to win and retain possession at important times of the game

Paul Scholes – More efficient than effective on a night when Rooney was spraying the kind of balls that are Scholesy’s trademark; almost prevented Brown’s own goal

Ryan Giggs – Again looked younger than his 37 years when skipping up and down the left flank; helped set up the first goal and provided the assist for the second

Wayne Rooney – Fine performance in the ‘hole’, linking United’s play and posing a variety of problems for the visitors’ rearguard

Javier Hernandez – A constant thorn in Marseille’s side with his pace, movement and razor-sharp positional sense; made his two goals look easy by being perfectly placed

Rafael (on for O’Shea, 37) – Back in the day job after his right-wing dynamics against Arsenal, he acquitted himself well before sadly being carried off after 33 minutes on

Antonio Valencia (on for Nani, 62) – Will start again soon after another positive appearance as sub; provided good service, including a pass leading to the second goal

Fabio (on for Rafael, 70) – The ultimate ‘like for like’ replacement helped the Reds to see out the match under some serious pressure