Manchester United is delighted to announce that Matteo Darmian has completed his transfer from Torino. Matteo joins on a four-year contract with the option to extend for a further year.

Darmian, 25, has made 146 appearances and scored 5 league goals for Torino since his debut in 2011. The defender has 13 international caps for Italy and was part of their World Cup squad last summer in Brazil.

Matteo Darmian said: “It is a dream come true to be joining Manchester United. I have loved the time that I have spent at Torino and I would like to thank the club and the fans for everything they have done for me.  I am sure they can understand when the opportunity to join the biggest club in world came along it was something I had to do.

"To work with Louis van Gaal, a manager that has achieved so much in football is such an exciting prospect."

Louis van Gaal said: "Matteo is a right-sided full back with the versatility of also being able to play on the left. He is a strong defender and has the ability to go forward in the attacking positions which is a fantastic attribute to have and much needed in the fast rhythm of the Premier League.

"Matteo will be a great addition to the team. I am delighted to welcome Matteo to the club and look forward to working with him in the coming days." 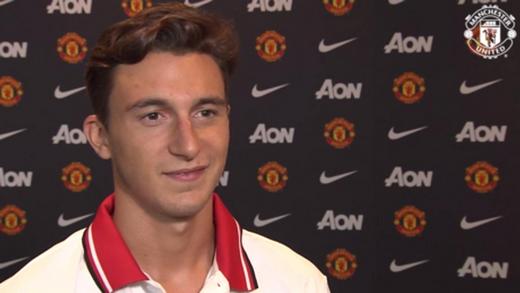 Moments after signing for the Reds, Italian defender Matteo Darmian gave his first exclusive interview as a Manchester United player to the club's official channel MUTV. Here's a transcript of what he had to say, and you can watch a clip on our dedicated Darmian page...
Welcome... you're now officially a Manchester United player. How do you feel?
I'm so excited. And I am very happy to be here at one of the most important clubs in the world.
When you found out that United wanted to sign you, what did you think?
I think for me it is a great opportunity. I want to be there. So I didn't think! (twice)
But was it difficult in a way to leave Torino because you've had a great three or four years there?
Yes, because the last four years have been amazing. But for me, Manchester United is a great opportunity and I have taken that opportunity to come here.
It's your first day here at the Aon Training Complex. Have your new teammates and the manager welcomed you?
Yes, the first impression is good and I want to start.
The manager says you can play right-back or left-back. Do you feel your best position is on the right?
My best position is on the right because my preferred foot is my right one. But I can also play with the left.
As for your style, are you an attacking right-back?
Yes, it's possible I want to score some goals. But my first idea is to defend.
You've had a successful time in Serie A. Are you confident and excited about playing in the Premier League?
Yes, I have watched the Premier League because it is an important championship in the world. I like the Premier League. It's different from Serie A but I want to prove myself.
What do you think the biggest difference will be?
I think the Premier League is a physical championship.
Will you need time to settle into a new club, a new country and a new language?
I want to learn English very fast. It's different here but I will try to make myself at home.
You will go on tour to the United States on Monday. Will that be a chance for you to get to know your teammates?
It's a great opportunity for me to know the other people who play for Manchester United and to know myself.
Is playing at Old Trafford in a few weeks' time a dream for you?
For me, it's a dream. It's one of the best stadiums in the world. A lot of people dream to play there. It's my dream and it's coming true.
Is it an exciting time to join United with Memphis Depay also joining the club and an agreement in place to sign Bastian Schweinsteiger?
Yes, it's a great opportunity. The team is a competitive team and we all want to play together and do well together.
Finally, what do you want to do as a Manchester United player - to win trophies?
Yes, it's a club with a great history and a lot of victories. I think the team will carry on in that direction of winning trophies.