United’s powers of recovery should never be doubted – but even so all appeared lost seconds before substitute Robin van Persie struck a late leveller in the dying embers of this tie at Upton Park as the Reds lurched toward an FA Cup third round exit.

Sir Alex's side's neat attacking play had warranted a first-half lead through Tom Cleverley, but while United tried to rule with possession West Ham commanded with power and presence, as Joe Cole twice assisted headers either side of half time for towering Hammers centre-back James Collins.

The tie looked over, then two substitutes combined to earn a replay. Ryan Giggs, who seconds earlier had missed a golden opportunity to head United level, produced a sublime pass that was received with equal aplomb by van Persie and, once his sights were trained on goal, his stoppage-time finish inevitably ended in only one outcome.

The Reds have had mixed fortunes in the cups against West Ham in recent times. The often-referenced fourth round defeat in January 2001, in which Paolo Di Canio scored the winning goal as Fabian Barthez stood arm aloft claiming offside, was an obvious disappointment. But two years later United exacted revenge with a 6-0 hammering at Old Trafford – Ryan Giggs and Ruud van Nistelrooy grabbed two goals each, with Phil Neville and Ole Gunnar Solskjaer also in on the act.

The most recent knockout competition meeting was in the Carling Cup in November 2010, in which West Ham hit four goals past a much-changed Reds side. Jonny Evans, Chris Smalling and Javier Hernandez were all involved that night and were named in United’s side for this visit to Upton Park.

Only five starters from the 4-0 league win over Wigan on New Year’s Day remained in the team: De Gea, Evans, Cleverley and Hernandez, while Rafael kept his place but was pushed forward into a midfield diamond. Patrice Evra and Michael Carrick were rested, while van Persie was among United’s substitutes.

It was a scrappy, somewhat formless start to the game but chances soon flowed freely at both ends. After nine minutes a sliding Chicharito couldn’t quite connect with Smalling’s pass across goal, while West Ham quickly went up the other end and from a corner Paul Scholes cleared a header off the line and Nemanja Vidic mopped up from the rebound.

United had the ball in the back of the net as the sprightly Shinji Kagawa picked out the run of Chicharito, who squared for Welbeck to finish past Jussi Jaaskelainen. Chicharito, however, was clearly offside. United had been gradually ramping up the pressure on the West Ham goal when Vidic’s header from Alexander Buttner’s corner was cleared off the line by young Dan Potts. 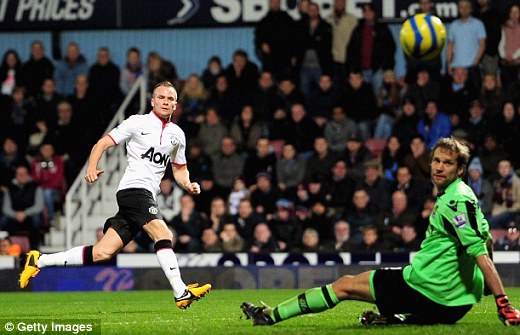 But the inevitable breakthrough arrived on 23 minutes, and in some style. Rafael and Chicharito combined down the right and the latter’s cross fell at Tom Cleverley’s feet at the far post. Cleverley’s first-time finish was excellent – he adjusted his body shape to steer the ball unstoppably into the far corner of the net.

The lead was surprisingly short-lived, however, as West Ham’s energy and efficacy remained undiminished. Four minutes after United scored, Joe Cole, playing his first game since rejoining the Hammers, crossed for James Collins to glance a header beyond De Gea.

The Reds had shaded the first-half action, particularly on the break with Kagawa, Cleverley, Chicharito and Welbeck lively in attack. But West Ham bristled with intent from crosses and set-pieces and Sam Allardyce will have felt worthy of half-time parity.

United started brightly after the break and good combination-play from Welbeck and Rafael on the right led to an opening for Cleverley on the edge of the box, but the ball bobbled and the Reds midfielder blazed a shot over the bar.

However, United were once again undone by the combination of Cole and Collins in the 59th minute and really it was a carbon copy of the Hammers’ first-half goal. For all United’s neat attacking play, it was West Ham’s power that held sway after the hour mark.

United subsequently called on some muscle in the form of substitute Antonio Valencia, who was joined on the field by in-form front man Robin van Persie as the Reds sought a more direct approach. The Dutchman almost made an instant impact from Buttner’s corner, heading just wide at the front post.

Even with added firepower, the momentum of United’s first-half play had been dulled by West Ham’s persistence. And the last 20 minutes – so often a time for swashbuckling comebacks and frenetic fights to the finish – looked like it would yield nothing. 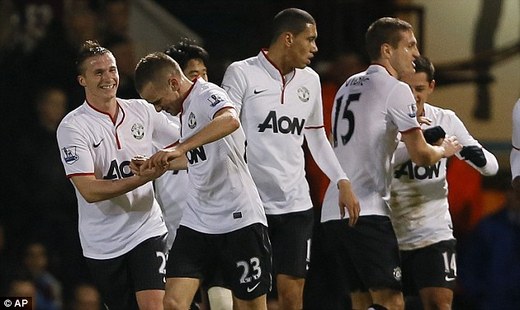 Then just seconds after Giggs had headed Rafael’s deep cross over the bar from close range, the Welshman inspired another van Persie rescue job. Latching onto Giggs’ brilliant pass into the area, the Dutchman was ruthless with his finish to claim a dramatic draw and set up a replay at Old Trafford.