Manchester United eased into the last 16 of the FA Cup with a comfortable fourth round victory over Fulham at Old Trafford.

Ryan Giggs opened the scoring in little more than two minutes, converting a penalty after Aaron Hughes' inexplicable handball, while second-half strikes from Wayne Rooney and Chicharito - the latter with a brace - ended the resistance of Cottagers goalkeeper Mark Schwarzer and his colleagues.

The Australian stopper performed first-half heroics for the swamped visitors, repeatedly denying Rooney and Nani, while the Cottagers' only other consolation was a late header from Hughes.

Sir Alex Ferguson made just three changes to the side which edged through the Reds’ third round replay with West Ham, replacing Anders Lindegaard, Alexander Büttner and Antonio Valencia with David De Gea, Patrice Evra and Michael Carrick respectively. 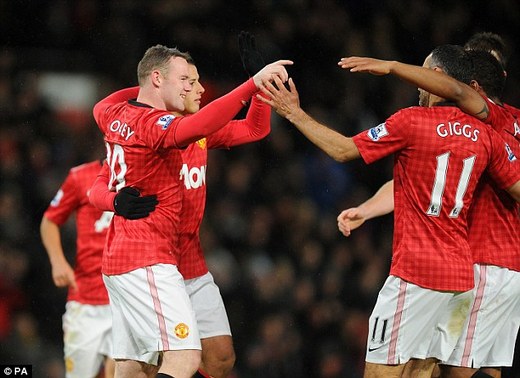 Wayne Rooney proved United’s match-winner with an early goal against the Hammers, and the England striker almost repeated the feat inside a minute after sloppy play from Steve Sidwell.

The Cottagers midfielder’s sloppy pass went straight to Rooney, who bore down on goal before having his initial effort blocked by Brede Hangeland, then Sidwell atoned by deflecting Rooney’s follow-up into the side netting.

Fulham’s reprieve was only brief, however, as the subsequent corner led to the opening goal. Rooney’s in-swinging cross was inexplicably flicked away from Chris Smalling by Aaron Hughes, and referee Mark Clattenburg had little option but to award a penalty.

Rooney, having missed his most recent penalty in the third round win over West Ham, stepped aside for Giggs to steer home from the spot, despite Schwarzer’s valiant attempts to save.

Fulham’s Australian stopper was kept busy thereafter, largely by Rooney and Nani, making only his second start since returning from injury. The Portuguese winger brought a sharp stop from Schwarzer at his near post, then his cross was controlled and turned goalwards by Rooney, whose shot was smuggled up onto the bar by Schwarzer.

Between those efforts, Damien Duff nervously contemplated his fate after nudging Giggs’ pass out of play with his forearm while deep inside his own area, only for Clattenburg to contentiously wave play on.

It appeared only a matter of time before United’s second goal arrived, and Nani appeared determined to grab it. The winger’s snapshot thudded straight into Schwarzer’s midriff, and seconds later his curling effort skirted narrowly wide of the Australian’s woodwork. A well-worked United counter then culminated in Rooney stabbing a close-range effort towards the near post, only to see Schwarzer brilliantly repel it.

Such that dominance, the precariousness of the Reds’ lead was underlined a minute later. Fulham’s first meaningful attack – started by breathtaking control from ex-Red Dimitar Berbatov, recipient of a warm reception from the home support – resulted in a 25-yard effort from Sascha Riether skidding narrowly by De Gea’s far post, and the interval arrived without further incident and with the outcome far from assured.

If Sir Alex’s interval message to his players hammered home the need to quickly put the tie to bed, it certainly registered. Little more than a minute of the second period had passed when Rooney’s close-range effort was cleared off the line by Hughes, but the England striker’s wait for a goal wouldn’t last another four minutes.

Anderson, whose string-pulling had been a fruitful first half outlet, released Rooney with a subtle angled pass which allowed the striker to race towards goal, cut inside Hughes’ challenge and bash home a left-footed finish which hurtled past Schwarzer. 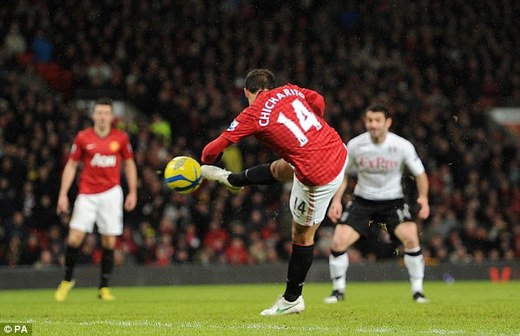 Game over: Hernandez scored Manchester United's third to put the result beyond doubt

The game’s second goal had a decisive air about it, and so it proved as Fulham’s resistance crumbled and two quickly became three. Nani’s cross to Chicharito was desperately cleared by Hughes, and the Portuguese kept play alive long enough to find Rooney, then helped on the striker’s low cross for Chicharito to hook a first-time finish inside Schwarzer’s post.

After a brief lull in proceedings as both managers reshuffled - Hugo Rodallega replacing Duff for Fulham, while Michael Carrick's 300th Reds appearance was cut short by Paul Scholes - before United once again cranked up the pressure. 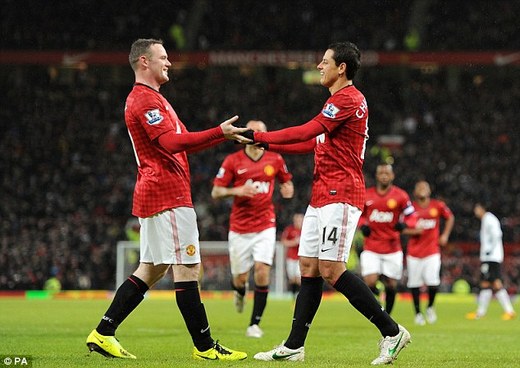 Fulham, to their credit, salvaged a modicum of pride when Hughes escaped Rooney's attentions to powerfully head Ashkan Dejagah's corner past De Gea, ending the hosts' hopes of registering a fourth clean sheet in six games.

United might have mustered a rapid response when substitute Shinji Kagawa fashioned space on the edge of the Fulham area, but the Japanese playmaker skied his effort over the bar. Rooney also had a late fifth ruled out for a perceived foul by Chicharito, but the decision had little bearing on a contest which had long since been finished.

The road to Wembley is renowned for being laden with pitfalls and hurdles. Having breezed into the last 16, there's little doubt that greater challenges await if United are to end a nine-year wait for FA Cup glory.