Manchester United and Chelsea will replay their FA Cup quarter-final tie after the Reds squandered a two-goal lead at Old Trafford.

The winner of the replay (date still to be announced) will then face Manchester City at Wembley in the semi-final on the weekend of 13/14 April.

On Sunday at Old Trafford, goals from Javier Hernandez and Wayne Rooney put a dominant home side two ahead inside 11 minutes, but a second-half fightback from the visitors spawned goals from Eden Hazard and Ramires and earned the Blues a replay at Stamford Bridge.

Sir Alex Ferguson's side looked to have buried the tie by the interval but were punished for a lacklustre second-half display as Chelsea deservedly fought their way back into the tie. The visitors would have won, too, but for a stunning last-minute save from David De Gea to deny Juan Mata.

The boss made just four changes to the side that exited the Champions League against Real Madrid, with Wayne Rooney, Chicharito, Shinji Kagawa and Jonny Evans returning to the Reds' starting XI.

While the pre-match atmosphere at Old Trafford failed to replicate the unyielding din that soundtracked last Tuesday's tie, it wasn't long before the home support had something to shout about.

There seemed little danger for the visitors when Michael Carrick meandered through central midfield, but without warning the Reds' chief string-puller dug out a magnificent diagonal pass that fell perfectly for Chicharito to loop a marvellous header over the stranded Petr Cech. 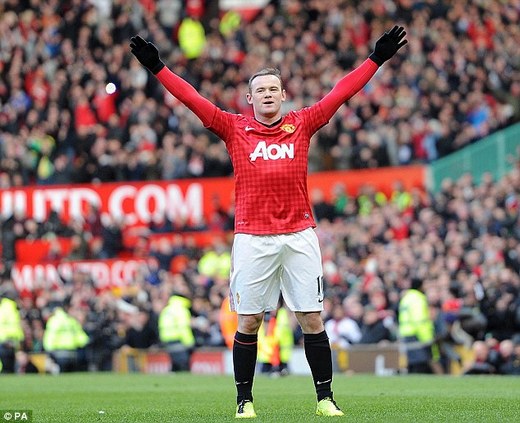 Less than five minutes had passed then, and the 10-minute marker bisected the award and conversion of a free-kick that doubled the Reds' lead. A lightning break from the hosts culminated in Victor Moses clumsily halting Nani's surge into the area. From the ensuing set-piece, Rooney's curling delivery narrowly missed Jonny Evans and David Luiz before nestling inside Cech's far post.

That was a mere blip in United's control of the half, however. An incisive move down the right flank between Rafael, Rooney and Nani culminated in the latter crossing for Chicharito to stab a left-footed effort just wide of Cech's near post.

Chelsea's goalkeeper was then called into a fine double save: first he blocked Rooney's shot with his legs, then he reacted brilliantly to tip the ball over the bar after Luiz miscued his clearing header and sent it on target.

The first period drifted to a close with little by way of noteworthy goalmouth action, though there was an enforced change of personnel as Nani made way for Antonio Valencia through injury.

Though United began the second period in no apparent distress, Chelsea soon set about turning the tie on its head. The 52nd-minute double substitution of Hazard and John Obi Mikel for Lampard and Moses gave the visitors momentum, and before the hour mark they halved United's advantage.

Again Mata was involved, cutting infield and ferrying the ball to Hazard, and the Belgian curled a quite magnificent effort inside De Gea's far corner with virtually no backlift.

The visitors had wrested control of the tie – aided by sloppy possession play from the Reds – and Chelsea deservedly levelled with 22 minutes remaining when a breakneck counter-attack resulted in Mata releasing Ramires into the United area. The Brazilian cut inside on his left foot and steered a clinical finish inside De Gea's upright to send the travelling support wild.

Sir Alex had already introduced Robin van Persie in place of Chicharito, and with 15 minutes remaining Kagawa made way for Danny Welbeck. Chelsea's final change was to send on Fernando Torres at the expense of Demba Ba.

Only a superb interception from Carrick prevented Torres' first touch from being a simple conversion of Hazard's pull-back, and it took another last-ditch challenge from Evans to prevent the Spaniard from drilling home with four minutes remaining.

In the final minute of normal time, the home support inside Old Trafford held its breath as Mata received the ball inside the United box and turned away from Evans. He would have sent Chelsea to Wembley but for De Gea's staggering reflex stop with his right boot.

The United stopper was called into action again in injury-time, fending away a thunderous effort from Hazard before Ashley Cole's follow-up was deflected off-target. When Howard Webb sounded the final whistle moments later, the Reds could be considered fortunate to still be in contention for a domestic Double.

Chelsea deserve plaudits for hauling themselves back into a tie in which they had appeared dead and buried, but United will rue the concession of such a handsome advantage. If the Reds are to reach Wembley and set up a mouthwatering Manchester derby in the semi-final, it will be via Stamford Bridge and an extremely tricky replay.