Wayne Rooney netted the only goal of the game to sink West Ham at Old Trafford and send Manchester United through to the FA Cup fourth round.

In his first appearance since United’s 1-1 draw against Swansea, 48 hours before Christmas, Rooney struck after just nine minutes to earn the Reds a fourth round tie against Fulham.

But Rooney also squandered a chance to put the game beyond doubt when he sent a penalty kick sailing over the bar on 79 minutes. His failure to find the net from 12 yards made for a nervy final 10 minutes, as West Ham pressed for an equaliser that, thankfully, never came. Instead, United progressed to the competition's next round and will now host Fulham – and welcome back Dimitar Berbatov to Old Trafford – on Saturday 26 January (17:30 GMT).

Against West Ham, Sir Alex made 10 changes from the side that beat Liverpool three days earlier, with only right-back Rafael keeping his place. West Ham boss Sam Allardyce also utilised his full squad, opting for youth over experience in a number of positions.

Nani and Anderson were welcome sights in the Reds’ XI following lengthy lay-offs, while Rooney enjoyed his first action in three weeks. The England international marked his return to the side with the game’s opening goal. But although the striker applied the last touch, he owed the ease of his finish – a tap-in from inside six yards  – to Javier Hernandez’s unselfishness and a clever, defence-splitting Anderson pass. 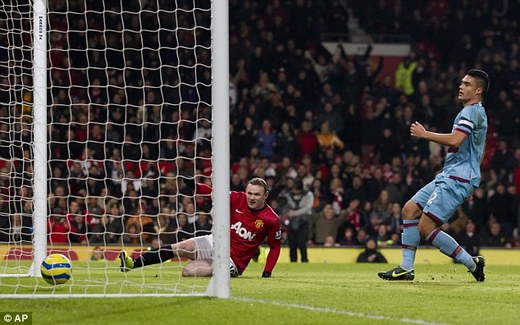 The ball sent the Mexican clean through and he would have been entitled to try and beat Jussi Jaaskelainen himself. Instead, Hernandez looked up and calmly rolled the ball across the area, leaving Rooney with an open goal.

West Ham fans, seeing their side 1-0 down so early, must have been fearing an onslaught. But the Reds didn’t threaten again until Nani and then Smalling went close in the 28th minute. Nani’s superb, screwed volley looked for all money like it was arrowing into the bottom corner before Daniel Potts intervened on the line. In the next phase of play, Chris Smalling met Rafael’s cross eight yards out but could only head straight at Jaaskelainen. 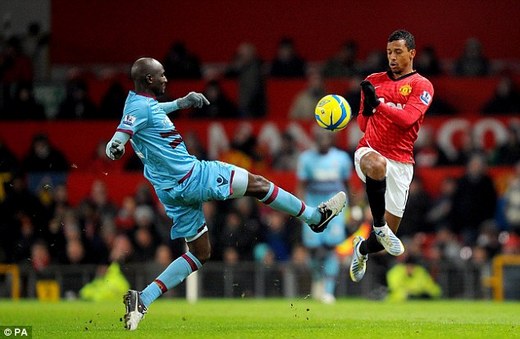 Nani also earned himself a start for Ferguson

Before the break, Nani let fly with a speculative 25-yard effort, Rooney forced Jaaskelainen into a smart stop from similar distance and Anderson squandered a half-chance after linking well with Hernandez. In contrast, West Ham looked toothless, failing to test Anders Lindegaard in the first period.

The Reds should have been 2-0 up inside three minutes of the restart, but wayward finishing by Hernandez meant Alou Diara’s error on the edge of his penalty area went unpunished. There followed a spell of sustained West Ham pressure, although solid United defending –  particularly from Phil Jones – ensured Sir Alex’s men didn’t concede.

The visitors came mightily close, mind you. It took a goal-line clearance from Rafael to keep Matt Taylor’s cross-come-shot out of the net, while the same player almost curled a right-footed effort into the top corner minutes later. 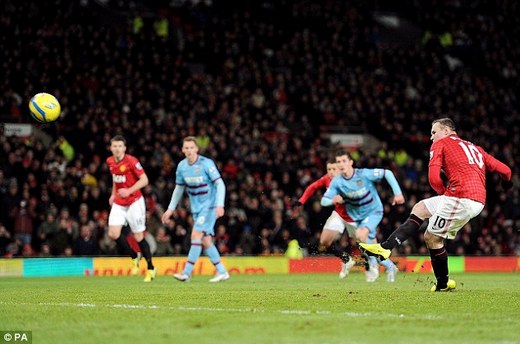 Good work by Rafael then teed up Hernandez, but Jaaskelainen spread himself bravely at the Mexican’s feet to smother his goalbound effort. Sam Allardyce, perhaps sensing cracks developing in the Reds’ defence, made a double substitution, while Sir Alex brought on Michael Carrick to anchor the midfield. The former Hammer brought calm to United’s engine room and restricted the visitors’ counter-attacking.

Giggs, who was outstanding all evening, rolled the back the years with a mazy dribble in the lead-up to the late penalty, won after the Welshman’s cross struck young defender Jordan Spence on the hand. Rooney stepped forward to seal victory but blazed his kick over the bar. Ultimately, it didn’t affect the final result. United hung on and Sir Alex’s men remain on the road to Wembley.