It's advantage United at half-time in the all-English Champions League quarter-final, thanks to Wayne Rooney's second opening goal in two missions on Chelsea's manor and a sterling rearguard action.

While the Reds won't be as comfortable as Real Madrid (4-0), Schalke (5-2) and Barcelona (5-1) heading into next week's second legs, Sir Alex Ferguson's men will still be favourites to reach the semi-finals after this psychologically significant win at Stamford Bridge. It was United's first victory in Chelsea's backyard since April 2002 when Rooney was a sixteen year-old still awaiting his senior Everton debut and the Reds were chasing, ultimately in vain, a fourth successive league title.

Rio Ferdinand - United's major signing in that same year, 2002 - returned to the Reds' line-up for his first appearance since 1 February and made a confident start, beating the diving Fernando Torres to a low ball in from the right. The same Chelsea striker buzzed around the United area in the early stages but his only shot on target was straight at Edwin van der Sar, also back in action after missing the weekend's win at West Ham.

More Wayne Rooney headlines flashed in front of our eyes momentarily when he collapsed in pain in the third minute, after Michael Essien’s raised studs caught the Reds forward on the top of the foot. Fortunately Rooney recovered, while his Ghanaian assailant escaped a caution.

United’s first corner appeared to cause some panic in the Chelsea ranks, with Didier Drogba making a hash of his clearance but then redeeming himself with a vital diversion of Ji-sung Park’s shot. The fit-again Korean scored when United last gleaned a positive result at Stamford Bridge – 1-1 in September 2008 – so it was no surprise to see him starting again, for only the second time since Boxing Day.

Drogba’s better known for business at the other end, of course, and he almost capped Chelsea’s decent opening to this tie when he powered a rising shot towards goal, only to see van der Sar’s fingertips flick the effort over the crossbar.

The Dutchman’s intervention enabled the Reds to draw first blood instead. Michael Carrick instigated the attack with a diagonal ball out to the left wing but it was the sublime first touch from Ryan Giggs that really took the breath away. Certainly the Chelsea rearguard were left gasping for air as the oldest outfield player on the pitch advanced past Bosingwa and pulled the ball back for Rooney – who else – to slot home, in off the base of the far post. 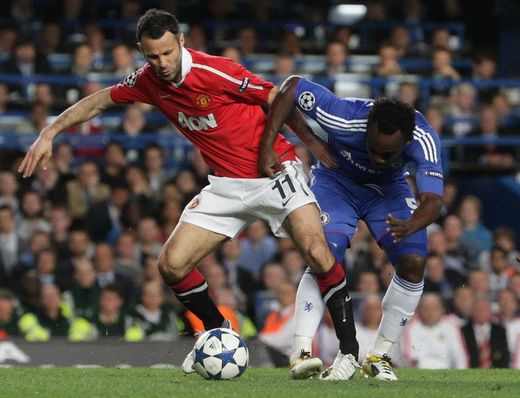 After 24 minutes, the vital away goal sought by Sir Alex Ferguson was in the bag and with it, a notable Champions League feat for Rooney – the fifth straight year in which he’s scored at the quarter-final stage. Moments later there was a concern that Wayne’s vital contribution would be his last, when another clumsy challenge – this time from Ramires – left him wincing. But Rooney is made of sterner stuff, especially when he has the scent of more goals in his nostrils after notching four in five days in London.

Torres famously can’t buy a goal, of course; even when he was played into space beyond the United back four, a heavy touch enabled Vidic to catch up and then pick him up angrily after the Spaniard went down too easily, without any contact. Spanish referee Alberto Undiano Mallenco didn’t show the first yellow card to Torres for his tumble – that dubious honour was reserved for Yury Zhirkov, after a high kick to Javier Hernandez’s head.

There were chances at both ends as the half ended dramatically. Cech saved well from Rooney; then Evra rode to United’s rescue with a brilliant goalline clearance to deny Lampard after Torres’ flick beat van der Sar but came back off the right-hand post. The Chelsea pair both lacked power in their connections but all the same, Evra’s alertness and agility deserve great credit as the Reds entered the break still 1-0 up.

The half-time lead survived an early scare when Ramires despatched a free header wide, shortly before Sir Alex was forced into his first substitution. Rafael was stretchered off after a collision with Drogba, but just as he did on Saturday, the United manager declined to send on a defender.

Instead Sir Alex turned a negative into a positive by bringing on an attacking player again, in the form of Nani. Valencia switched to right-back and the Reds regrouped to weather a storm and watch Drogba’s overhead kick bounce marginally beyond the far post. The same upright was also passed by an Essien volley but really there was little for van der Sar to do at this stage. His opposite number, on the other glove, did have to intervene smartly when Nani whipped a ball across the face of goal on the counter-attack. Cech’s touch was just enough to take the ball away from Hernandez; without it, the Mexican would surely have made it 2-0.

This match reporter almost jinxed it for United’s goalkeeper, when Torres’ arcing header looked for a split-second as if it was going to beat him in the 73rd minute. But van der Sar produced one of the best saves of this age-defying final season, flying to his left at full stretch to push the effort away.

While Torres continued to toil in search of his elusive first goal for Chelsea, his team-mates Drogba, Zhirkov and later Bosingwa were withdrawn. Nicolas Anelka, Florent Malouda and Jon Obi Mikel took their places in a mainly attacking alteration by Carlo Ancelotti, while Sir Alex opted for a simple change of striker - Dimitar Berbatov on for Hernandez.

None of the new personnel could make a difference to the scoreline although Anelka might have done had Evra not beaten him to Malouda's cross with a brave header. Nani, meanwhile, could have doubled the Reds' lead on the break but Cech was quickly off his line to smother the danger. Evra's good work was almost undone when he appeared to bring down Ramires inside the box in injury time but referee Undiano ignored the vehement shouts from the Chelsea players and their partisan crowd. He didn't, however, turn a blind eye when Torres also went looking for a penalty and booked the frustrated Spain striker for simulation.

There was nothing fake about United's triumph, however, or undeserved. This was a richly-merited victory - now all Sir Alex's men have to do is finish the job in front of the faithful. Bring on the second leg.

Rafael
No question the boy's made for this level. Curbed his attacking instincts and defended brilliantly when Torres or Drogba drifted into his space. Unlucky to suffer an injury just after half-time.

Rio Ferdinand
Didn't look fully fit when he opened out into a sprint but timely interventions in the penalty area proved his footballing brain hasn't slowed one bit.

Patrice Evra
Endured a rough spell at the hands of Drogba early in the second half but played a big role in United's win. Cleared off the line on the stroke of half-time to preserve the lead. Survived an injury-time penalty scare.

Antonio Valencia
Saw plenty of the ball in the first half and held onto the ball well in isolated positions. Tracked Ashley Cole's forward runs and even found himself at right-back after Rafael's departure. He played the role flawlessly.

Ryan Giggs
Tackled well in midfield but his biggest contribution came with a fantastic first touch and lay-off to Rooney for the Reds' crucial away goal.

Ji-sung Park
Linked well with Evra down the left and defended with discipline, especially in the second half. Won plenty of tackles.

Wayne Rooney
Made headlines for the right reason, opting for placement rather than power when Giggs' ball found him eight yards from goal. Also passed well and was key to United's counter-attacking.

Javier Hernandez
Struggled to make the ball stick on occasion but buzzed around the Blues' defence, never giving Terry or Ivanovic a moment's peace.

Nani (for Rafael, 51)
Didn't have his usual impact, although did look dangerous when he got into advanced crossing positions.

Dimitar Berbatov (for Hernandez, 78)
Worked hard across the Chelsea back four but with little reward at a time when Chelsea threw everything at United in search of an equaliser.