Giggs ran over half the length of the pitch before putting the ball into the roof of the net sparking the famed celebration in the 1999 semi-final at Villa Park
The famous Ryan Giggs goal that sentenced Arsenal to FA Cup semi-final heartache still haunts Arsene Wenger’s dreams, writes Tom Hopkinson in the Sunday People.
Ask anyone to name their three greatest Cup moments and top spot will probably go to the Manchester United star’s solo goal, the shirt-whirling celebration and that ­extravagantly hairy chest, in 1999. 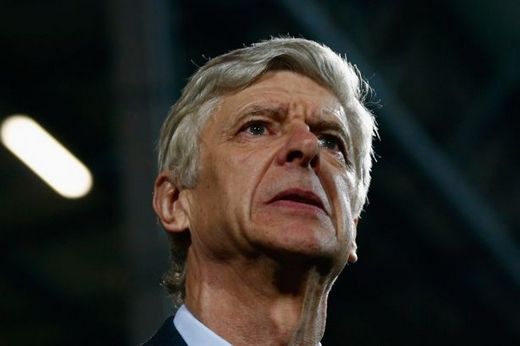 Bad memories: Wenger says that he can still hear United's celebrations from after that match
But ask the Gunners boss and you will get a different response.
In his quiet moments, Wenger can still hear the celebrations from the United dressing-room.
And that is because this single ­moment of Cup ­history did not just make Sir Alex Ferguson’s men semi-final winners – it also made them ‘Treble’ winners.
For the Frenchman is ­convinced that had Giggs not embarked on his breathtaking run when Fergie’s team were down to 10 men in extra-time at Villa Park, with the score 1-1, United would have ­finished the season empty-handed.
It is a tie that even now, 16 years on, still has a grip on the memory. Roy Keane was sent off, Dennis Bergkamp saw a penalty saved by Peter Schmeichel and then Giggs ran through Arsenal’s midfield and backline before thumping a dramatic winner high into the roof of the net.
So do not talk to Wenger about the Cup failing to stir the emotions this weekend.
Just read on and judge for yourselves whether that 10-man triumph had a lasting effect on the Gunners’ chief.
Wenger, whose side face United at Old Trafford in their Cup quarter-final on Monday night, said: “When Giggs retired I saw a replay of the goal and I think that goal won them the ‘Treble’ – because, if Bergkamp scores, the game is over.
“I can still hear the shouts of that team, having won. They couldn’t believe it
because they were down to 10 men. It was a trauma for us and a positive for them.
“Bergkamp never wanted to take a ­penalty again and the result put them on the road, it put them on a crest of euphoria.
“And in the same way they won the title – just. They played at Blackburn on May 12, the night after we had lost at Leeds in the last minute, when Nigel Winterburn was kicked off the pitch and Jimmy Floyd Hasselbaink scored at the far post.
“Kaba Diawara had hit the bar twice for us in that game.
“And after that, they won the Champions League final in the last minutes – 1999 was a ­miracle year for them. 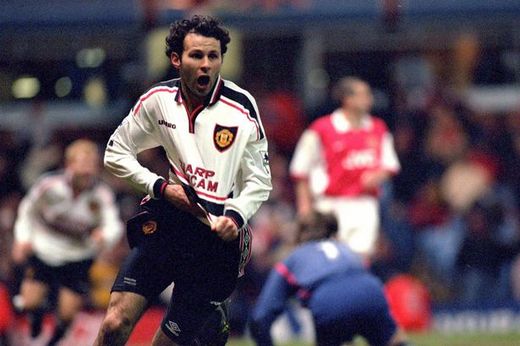 And celebrate: Giggs famously ripped off his shirt in celebration of the goal
“Ryan Giggs was at the peak of his career and that goal was certainly what ­decided their season.”
United won the Premier League by one point from Arsenal that season, but this time out both Wenger and current Old Trafford boss Louis van Gaal accept that the title is already out of their grasp.
Wenger added: “For years, Arsenal versus Manchester United was the game of the season that decided the Premier League, but at this moment it’s not the case.
“It is still a big game. It’s not just another game because also it’s the quarter-final of the FA Cup.
“We fought until now to be here and now we want to go to the semi-final.”
Both Van Gaal and Wenger have been criticised for the way their teams have played recently, but Wenger insists it is too soon to compare Van Gaal’s style with Ferguson’s.
He said: “It’s too early to say they are more vulnerable now. They are still a strong side. I do not expect any weakness from Manchester United.
“I know that if we want to qualify we have to produce a strong performance as they have lost just two games in the last 22.
“They won as well sometimes under Ferguson without being absolutely ­exceptional. No manager can maintain ­always the same quality.
“It is like that today. You have to be always perfect every single day. But our job is first of all about winning.
“For us, we have nothing special against Manchester United. We just want to qualify. That’s why I think, ‘Let’s not consider Manchester United. Let’s focus on our performance’.
“The FA Cup is about giving it your all on the day. We know they have a little advantage playing at home, at Old Trafford, where they feel confident.
“So to compensate for that we have to put more effort in and produce a really top-level performance.”