'It's not the fear of failure. It's just craving that feeling of winning the title. We lost by one point last year and it stays with you.

'You go away on holiday, you're lying on the beach trying to enjoy yourself with the kids, and you do, but then you have a quiet moment, it comes back to you what happened and, I'll say it, you're p****d off. 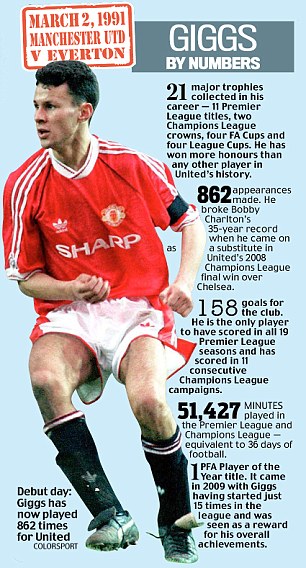 'It's the last game of the season and you'll never get it back and you're just gutted. It's an emptiness.

'But you don't jump to any conclusion and, slowly, it goes. You look forward to the next season and the challenge.

'But that final, I've never even watched the game back. The manager has probably watched it six or seven times but I've not.'

It seems appropriate, here, to mention some Ryan Giggs statistics. He has played 862 times for United since his debut against Everton on March 2 1991 - 20 years ago. He has won 11 Premier League titles, four FA Cups, four League Cups, eight Charity Shields, two Champions Leagues, one Super Cup and one Club World Cup.

He is 37 years old and has two young children. Doesn't there come a time when you have simply won enough? When one more title or cup doesn't actually make that much difference? It is apparent that there does not.

'At the beginning of your career you are just driven by a desire to get in the first team and stay there,' said Giggs. 'Then in later years, the desire is still there, the challenge is still there, and you enjoy it more when you are older because you can savour it.

'But I don't think about the titles I've won. I just look at the future. Like I said, I want that feeling back again.'

Locked in the vaults of Granada TV is a video of a teenage Giggs playing for his boys team in a final at Anfield. He is the star, hogging the ball on the field and the camera off it. He is cocky and confident, full of it.

These days, the image is different. The dignified elder statesman of the Barclays Premier League, the one everybody eventually wants to be. Somewhere along the way, after the skirmishes with Lee Sharpe and Nicky Butt and the celebrity girlfriends, something changed.

'Probably an accumulation of things made me change,' he added. 'I remember in my first full season, Today newspaper ran, like, a week-long sort of feature, delving into my family, my dad's family, the rift between my mum and dad, that sort of thing. That wakes you up quite quickly and toughens you up.

'I went out with a few girls who were famous as well, and you get photographers following you. It was just . . . I just didn't like it. I was 18 or 19 at the time. Sharpey was great. We got on really well and there's that famous incident at his house when the manager came and found us and dragged me out.

'That probably had a big impact on me in terms of the fact you've got to live your life right. 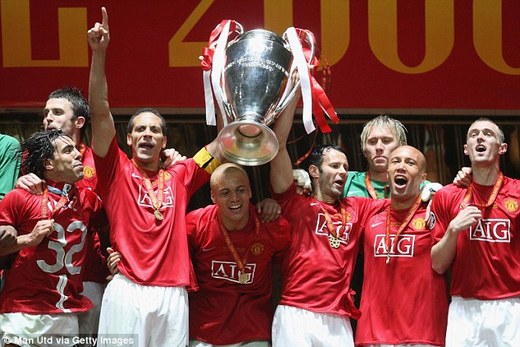 Silver service: Giggs has won many honours for Manchester United, but it is the defeats that stick in his mind

'But Becks coming played a part too. I was trying to keep out of the limelight, then Becks came and everything happened, so that was good timing for me I suppose.'

Giggs is expected to mark his 20-year anniversary by playing for United at Chelsea. It will also see him equal Sir Bobby Charlton's record of 606 league games for his one and only club.

For the record, his debut came as a substitute against Everton at Old Trafford in the old Division One. Giggs didn't appear again until he started against Manchester City two months later. 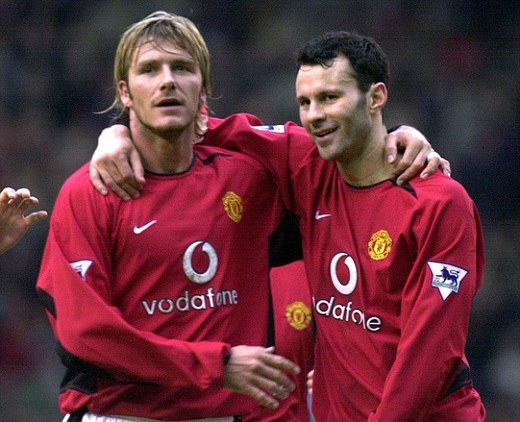 Star quality: Giggs reckons David Beckham's emergence took some of the limelight away from him

'I remember Dave Watson going through the back of me,' Giggs smiled. 'I remember having a big cut on my knee for ages.

'I remember my full debut a lot more, but Everton? Not a lot really.

'I remember crossing a ball and Danny Wallace heading it just wide. That's about it really.'

Cover story: Ryan Giggs is featured in the latest issue of Sky Sports magazine, where the picture (above) was first published. See this month's issue for an anniversary interview and more images.